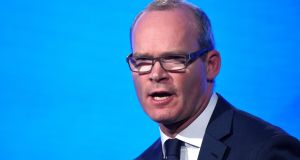 Minister for Foreign Affairs Simon Coveney has described media reports claiming the Government is now “hardening” its stance on the Border with Northern Ireland remaining open after Brexit as “nonsense”.

The report reads: “A leaked Brussels document yesterday revealed the Irish Taoiseach has significantly hardened the EU’s line over how to keep the border with the south open after Britain’s EU exit.

“In an ‘all island’ solution, Leo Varadkar is now insisting Ulster remain part of the single market and customs union while the rest of Britain leaves it.

“Ministers have told The Sun that the Irish PM has only been forced to adopt the stand under heavy political pressure from Gerry Adams’ Sinn Féin.”

Responding to the article on Twitter on Saturday morning, Mr Coveney said: “This article is nonsense. Irish Government is consistent and firm on preventing hard Border. Too important an issue to be spinning inaccuracies!”

Mr Coveney’s response follows Mr Varadkar’s remarks that Northern Ireland does not have to remain in the European single market and customs union but could abide by some of their rules.

Mr Varadkar said Ireland, the British government and the EU all agreed there must be no hard Border between Northern Ireland but the question of how that can be achieved had yet to be answered.

The Taoiseach was reacting to news that the EU is demanding Britain accept Northern Ireland may need to remain inside the European customs union and single market after Brexit to avoid “a hard Border on the island of Ireland”.

The European Commission on Wednesday circulated an update on its Brexit negotiations with the UK which concludes that the avoidance of “regulatory divergence” on the island of Ireland is “essential” to protect the peace process.

The scenario of Northern Ireland remaining in the single market or customs union if the rest of the UK leaves has been ruled out by the British government.