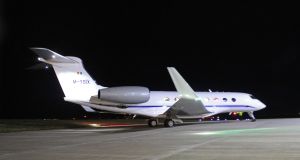 This week, as part of the Paradise Papers investigation, it emerged that the Irish businessmen Denis O’Brien, Jerry Kennelly and Ray Nolan avoided paying VAT by buying and registering their corporate aircraft in the Isle of Man.

Almost 1,000 aircraft bought for business use have been imported into the European Union over the past 10 years through the Isle of Man, which has one of the world’s largest offshore private-aircraft registries.

Structuring aviation deals to reduce one’s tax bill is not unusual – and it is quite legal. When Boeing hands over a new airliner it often does so on a trip out over the Pacific, especially if the buyer is a high credit risk, and can qualify for export-import bank loans subsidised by US taxpayers. Thousands of aircraft owners get a reduced tax bill by registering in the American state of Delaware. And many hundreds of big airliners are registered in Ireland, even though most of them never fly near the place.

In fact the Irish economy benefits from offering tax deals to persuade aircraft owners to base themselves here, which explains the hundreds of large airliners registered with the Irish Aviation Authority. Ireland is to aviation what flag-of-convenience countries such as Bermuda, Liberia and Panama are to shipping.

General aviation – which is to say that not involving airliners – are a different market. Denis O’Brien’s Gulfstream VI jet has a €60 million price tag, is capable of reaching the west coast of the United States in a single trip and outperforms most other company jets.

Yet even the wealthiest owners seldom reserve their aircraft exclusively for their own use. Most place their planes on the books of companies such as WestAir Aviation, at Shannon Airport, which charter them to other businessmen.

A Gulfstream VI could easily earn upwards of €25,000 a day – and demand is high. Chartering helps cut the considerable cost of ownership, even for the most wealthy

A Gulfstream VI could easily earn upwards of €25,000 a day – and demand is high. Chartering is a way to reduce the considerable cost of ownership, even for the most wealthy. Charter companies also manage rich people’s jets, maintaining them and providing pilots.

But very few corporate aircraft are on the Irish register, and the tax breaks for airliners don’t translate into too many benefits for local Irish aircraft owners. Larry Goodman’s Anglo Beef Processors Ireland has a company aircraft, a Eurocopter Dauphin that is now 10 years old. A new one of these helicopters would cost about €8 million.

Dawn Meats’ company aircraft is a relatively frugal Cessna 441 Conquest twin turboprop, built in 1980 and probably worth less than €1 million.

Several hundred privately owned aircraft on the Irish register are used almost exclusively for recreation. The few jets among them are almost exclusively owned by charter companies, and many of the remainder – all propeller driven – are owned by flying schools, flying clubs and syndicates, where a group of people share a small aircraft.

The aircraft predominantly owned by single individuals are mostly rather elderly machines. Perhaps the oldest is an Avro Cadet Biplane from 1935. It is owned by John O’Loughlin of Castlebridge, Co Wexford.

The retired Aer Lingus pilot Neil Johnston owns a Piper Cub from 1944, examples of which can be found for sale for €44,000, although he warns that, while many people have the cash to buy a small aircraft, very few have the money to operate it. His aircraft was grounded for two months this summer for some expensive maintenance. “There is rarely such as thing as the glamorous world of aircraft ownership,” he says.

Flying enthusiasts often save cash by building their own aircraft from kits, and there are 43 home-built aircraft on the Irish register, including the only Irish example of a Rutan Long-EZ, the type of plane in which the singer-songwriter John Denver died over Monterey Bay, in California, in 1997. The Irish Long-EZ is owned by Fia and Carina O’Caoimh of Kilmacanogue, Co Wicklow.

The smaller the aircraft, of course, the less expensive it is to operate, and that is one of the factors leading to the growth in numbers of microlight aircraft – which is to say planes that weigh less than 495kg. There are now 147 microlights on the Irish register.