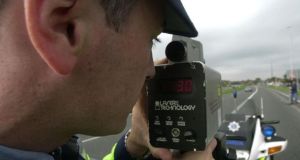 Drivers caught speeding at between 20 and 30 km/h over the limit could get seven penalty points and a €200 fine, according to proposals from Minister for Transport Shane Ross.

The changes have been put forward because Mr Ross believes the current system of flat penalties does not provide an adequate deterrent.

Mr Ross told RTÉ Radio’s News at One programme that “speed is a killer.”

He said the idea behind his proposals “is that the faster you go the more points you get”.

“The current system is a flat rate, flat fine and it obviously isn’t deterring enough people, we’re having a large number, absolutely appalling number of people being killed as a result of speed,” Mr Ross said.

“We have got to discourage and prevent and inhibit people speeding irresponsibly. The number of fines for speeding is absolutely enormous but we’ve got to bring down the deaths. That’s what’s wrong, too many people are being killed.”

Under the plan, drivers travelling up to 10 kilometres above the speed limit would receive between three and five penalty points and an €80 fine.

Drivers detecting travelling at speeds between 10 and 20 kilometres above the limit would receive between four and six points and €150 fine.

Those travelling more than 30km/h above the limit will no longer be dealt with under the penalty points system and instead will face prosecution for dangerous driving.

Speeding is the driving offence that attracts the highest number of penalty points.

Overall a total of 189,095 penalty point endorsement notices for a range of motoring offences were issued, a decrease of 4.9 per cent on the previous year.

According to the latest data from the CSO, women drivers were more likely to incur penalty points for speeding than men.

The changes proposed by Mr Ross would represent a considerable ramping up of the penalties for errant drivers.

The current penalty for speeding is three points, rising to five if the motorist opts to contest in court and loses.

Any driver who receives 12 penalty points in a three-year period is automatically faced with a six-month driving ban.

For probationary or novice drivers the disqualification threshold is seven penalty points.

The number of people killed on the roads up to December 11th was 149, according to provisional figures from the Gardaí released on Tuesday.