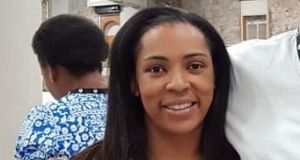 Donnah Sibanda Vuma will receive an apology from the contractor which runs the Knockalisheen accommodation centre in Co Clare following the incident on Wednesday night. Photograph via Facebook

The Department of Justice has said the refusal by staff at a direct provision centre to give food to an asylum-seeking mother for her sick child was “regrettable”.

Donnah Sibanda Vuma will receive an apology from the contractor which runs the Knockalisheen accommodation centre in Co Clare following the incident on Wednesday night.

Ms Vuma, who is originally from Zimbabwe, has been living in the centre with her three children for four years.

Last month she appeared on the same platform as President Michael D Higgins at the launch of a migrants initiative in Limerick.

She has been vocal in the past about the refusal of direct provision centres to allow its residents to use cooking facilities.

In a Facebook post at 1.07am on Wednesday Ms Vuma said: “I have a sick child in the room. He has tummy ache, diarrhoea, has vomitted a couple of times already.

“In an attempt to help him keep his strength up I’ve asked a friend to accompany me to the canteen to ask for some bread and milk so I can give him.

“The night staff has refused to give me even one slice of bread despite explaining the situation to them. They have notified me that the centre management has given strict instruction not to give any food items tea, coffee, milk, bread, sugar etc outside of canteen hours!”

“After pleading with them that this is an exceptional case they told me to wait until 7am to speak to management. One of them said to me I should give the child water because he doesn’t make the rules, that’s the end of it.”

In response to queries from The Irish Times, the Department of Justice said the Reception and Integration Agency (RIA), which monitors direct provision centre said: “The contractor has since reverted to us to advise that this unfortunate, but isolated incident was a miscommunication between staff.

“Unfortunately a new staff member misunderstood a request and informed the night porter that no food was to be provided which led to this regrettable incident.

“The contractor will also ensure that tea/coffee and snacks are available on a 24/7 basis as per the contract.”

The direct provision system in Ireland has been consistently criticised for keeping asylum-seeking families in accommodation, often for years, while denying refugees access to work.

The system, whereby they receive €21 a week, has been widely criticised both inside and outside Ireland.

In its statement, the Department of Justice said 133 of the recommendations had been fully implemented and a further 36 were in the process of being implemented.