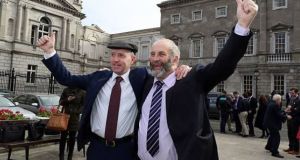 Shortly after 2pm on Sunday outside the count centre in Killarney, Co Kerry, the Healy-Rae wagons lined up for what is now the family’s traditional victory parade after years of winning elections and never losing one.

Colourful jeeps and trucks and cars emblazoned with Healy-Rae paraphernalia and the old Fianna Fáil/Kerry colours filled up the road, with traditional music and bagpipes blaring through loud speakers.

The Healy-Rae political machine has now five “wheels”, to paraphrase Johnny Healy-Rae, the eldest politician of the third generation to follow the lead set by the patriarch, the late Jackie Healy-Rae after he parted with Fianna Fail in 1997.

The senior members, of course, are TDs Michael and his brother, Danny Healy-Rae. The latter’s son Johnny (34) won with an extraordinary 3,023 first preferences in Kenmare, 1,000 votes over quota.

She was co-opted on to Kerry County Council in 2016 when her father Danny was elected to the Dáil. However, her own vote-gathering on Friday was extraordinary with 3,099 first preferences, nearly twice the quota of 1,585.

On Saturday, their first cousin Jackie (24), the son of Michael, was the story in Castleisland, with 2,621 first preferences, in a race that saw former TD Thomas McEllistrim, a scion of a dynasty that delivered three generations of Fianna Fáil TDs, lose out.

Jackie Junior is a parliamentary assistant for his father. He currently faces prosecution for an alleged late-night assault. The case is due back for mention in Kenmare Court on June 7th. The prosecution did not stop him running for political office. Nor did it stop thousands of people in Castleisland and Gneeveguilla voting for him.

June 7th is also the date when Healy-Rae Jnr should be making his first appearance as a member of Kerry County Council.

However, it is Johnny Healy-Rae, who is emerging as the leader of the younger generation of Healy-Raes. Articulate, he has a natural wit reminiscent for many of his grandfather Jackie, who died in 2014.

Following the declaration of Maura Healy-Rae’s victory, it was the white-shirted Johnny who gathered the family and supporters together on the floor of the sports centre for the traditional post-election pep talk. Those listening included his father and his uncle.

The next election started today, declared Johnny Healy-Rae, who is managing director of the family’s plant-hire company. And the clan cheered him.

Halfway through the Kenmare tally on Saturday, Sinn Féin TD Martin Ferris said to Johnny Healy-Rae, half-admiringly, as they passed in the count hall: “You’ll be going for President next!”

Never lost for words, Healy-Rae replied: “They have 300 acres around the Áras, and if they let me fence it off and cut silage, I’ll run for it!”

Explaining the family’s success, he said: “The people of Kerry, the people we represent, the people that vote for us know what we stand for,” he said before setting off on the victory parade.

“We give a strong complete political service. We had four elected until this weekend, now we have five. We will do more of the same and that’s working for people, being with people.”

Over the last year Fianna Fáil has expressed growing confidence that it could win back a second seat in Kerry in the next Dáil election. Based on the weekend’s numbers, it has a fight on its hands.

“We’ll be fighting very hard to win two seats in Kerry the next time. And whoever will come for it, they’ll have to take it off us because we won’t go down without a fight!” said Johnny Healy-Rae.

And then he left to lead the parade.