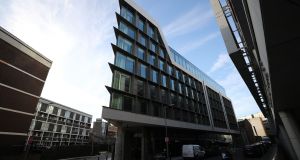 The 300-bedroom Marlin Hotel on Bow Lane East in Dublin 2 is one of several large new establishments being constructed in the centre of the city. Photograph: Nick Bradshaw

More than 15,000 new hotel rooms are being planned for Dublin over the next three to five years, almost doubling the city’s current capacity.

A comprehensive industry analysis seen by The Irish Times shows that some 100 new hotels or guest accommodation developments are either already in construction or working their way through the planning process.

They represent 15,000 new rooms on top of the existing 18,000 rooms already in the capital spread across 250 existing hotels.

Some of these will not materialise due to a lack of planning permission or other hurdles during the development process, but the figures show that amid a housing crisis, residential developments are competing for land and investment with hotels and other forms of short-term accommodation.

“They are in very serious competition; they’re a choice as opposed to building housing because of the land available in the city, and the price of land in the city,” said Mike Allen, director of communications and advocacy with Focus Ireland.

“We have created a financial incentive for investors to build student accommodation and hotels. Of the available things to be built we are pushing people towards non-home construction projects.”

The majority of hotels in the city have been established for some time, but attractive returns on offer to investors have led to several large new establishments being constructed right in the centre of the city.

Among these are the 234-bedroom Hyatt Centric on Dean Street in Dublin 8; Marriott’s 158-bedroom Moxy Dublin City hotel at Sackville Place, Dublin 1; and the 300-bedroom Marlin Hotel on Bow Lane East in Dublin 2.

The Mayson Hotel, next to the new Central Bank building and close to developer Johnny Ronan’s Salesforce Tower at North Wall Quay, was recently opened by Press Up Entertainment Group, the hospitality company run by Paddy McKillen jnr and Matt Ryan.

The same company is involved in the delivery of a new 213-bedroom hotel as part of its wider development of the Clery’s Quarter on O’Connell Street.

More than €100 million was spent on prospective hotel sites in Dublin last year, with investors attracted by the relatively light regulatory burden offered by hotel investment compared with housing, as well as returns driven by an expanding economy and tourism sector.

A spokeswoman for Fáilte Ireland said its analysis showed there 18 new hotels, five extensions and seven apart hotels were under construction.

“After almost a decade of inactivity, a strong pipeline of new hotel accommodation stock is expected to improve tourism capacity pressures in Dublin. Ireland got caught in a situation where it was losing business because there wasn’t enough hotel capacity in Dublin, particularly to cater for the lucrative conferences and events business tourism sector.”

The spokeswoman added that Fáilte Ireland was forecasting a need for 5,000 new rooms by 2021. It estimates each 200-bed hotel creates tourism revenue of €9 million and contributes €2 million to the exchequer per annum.

Aiden Murphy, a partner and hotel industry expert with Crowe Ireland, said Dublin hotels are among the busiest in Europe.

“Occupancy has dropped from 84 to about 82 per cent but it is still probably second- or third-highest of any capital city in Europe,” he said.

1 Woman stranded in Ireland due to pandemic has ‘miracle baby’
2 Covid-19: Critical cases from NI could put pressure on services in Republic
3 US election: ‘Donald Trump needs to go. White America got what they want’
4 Covid-19: Public urged to ‘stay at home’ as 1,025 further cases confirmed in State
5 Australia demands answers after women taken from Qatar Airways flight and strip-searched
Real news has value SUBSCRIBE