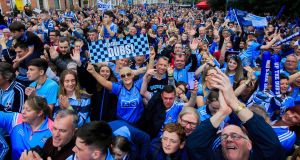 Dublin fans during homecoming celebration marking the historic ‘five-in-a-row’ victory of the men’s team and the ‘three-in-a-row victory’ for the women in Merrion Square. Photograph: Gareth Chaney/Collins 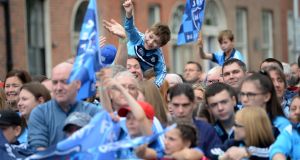 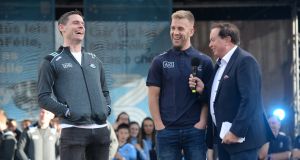 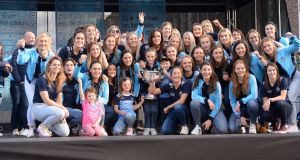 The sun shone on the Dublin men’s and women’s footballers for their joint triumphant homecoming.

After a morning of heavy rain, the day cleared up sufficiently for the 16,000 fans who gathered on three sides of Merrion Square for the big celebration which was a ticket-only affair.

It was, as compere Marty Morrissey repeatedly reminded the crowd, a historic achievement for Dublin’s men to win a five-in-a-row – something never before achieved in the 135-year history of the GAA.

Victory over Galway secured a third title in a row for the women’s team, another first for Dublin GAA.

Yet the homecoming was a rather subdued affair given the favourable weather and the enormity of the achievement for both teams.

Perhaps, the two weeks that have passed since both finals have taken the edge off the ecstasy for supporters. The familiarity of victory, 10 All-Ireland senior football titles in eight years, might also be a contributing factor.

All the members of the women’s and the men’s panels were interviewed separately.

Ciarán Kilkenny, the man of the match in the replayed All-Ireland final against Kerry, declined to sing his party piece Barbie Girl, but the ever-reliable crowd favourite Kevin McMenamin obliged with his version of Grace.

Though it was billed as a joint homecoming at no stage did both teams share the stage depriving the fans and the photographers of a rare opportunity.

The women were first on stage with manager Mick Bohan suggesting that in no other sporting code would a women’s team and a men’s team be give the same homecoming.

“I can’t imagine this has happened anywhere else in the world before. To the people of Dublin, thank you very much.”

Dublin forward Niamh McEvoy is the partner of Dublin full-forward and freetaker Dean Rock. “We don’t talk about football a huge amount. It’s just a normal relationship,” she told Morrissey.

When her partner came to take the microphone, he was asked by Morrissey if he felt the pressure of 82,300 fans in Croke Park bearing down on him during crucial free-kicks. “It helps when 60,000 of that 82,000 are Dubs,” he quipped.

Long-serving defender Paddy Andrews recalled being beaten by Kerry in the 2009 All-Ireland semi-final by 17 points. At that stage nobody was talking of one All-Ireland let alone the seven that have been won in the last nine seasons.

“What was the feeling like when that final whistle blew,” Morrissey asked midfielder Michael Darragh MacAuley. “Ah shur, it was only great, wasn’t it?”

“What was the turning point in the year?” Morrissey asked him. “When Con O’Callaghan got his haircut. It was smooth sailing from there.”

Nobody mentioned the retirement word though veteran forward Bernard Brogan (35) came close having made the 26-man panel for the replayed game despite a serious injury.

He promised to sit down with Dublin manager Jim Gavin next week and have a cup of coffee to discuss his future. “I’m not giving up yet, but I am very old,” he says.

The last word was from Gavin who said he was still enjoying himself as Dublin manager. So much for the rumours that he would retire given his status as one of the greatest managers in the history of the game.

The last 15 minutes of the replay, he said, showed his players as “best version of themselves”.

Will there be a six-in-a-row? “All I know is that we are going to enjoy this one. We are going to have a great winter celebrating this one with the players and supporters. Átha Cliath abú.”