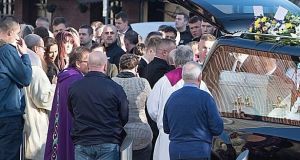 Sonia Aylmer’s letter was read out to mourners at the packed church. Photograph: Liam Burke/Press 22

The mother of Brooklyn Colbert paid tribute in a letter to her “brown-eyed boy” at his funeral Mass in Limerick on Friday.

The letter, read out at St Saviour’s Church, on behalf of Brooklyn’s mother Sonia Aylmer, described a boy blessed with the “softest little protective soul”.

Brooklyn’s body was found at a house in Limerick last Sunday. As his family prepared to carry the white coffin into the church, a man was appearing in a court nearby charged with his murder.

“When God tried to take you when you were nine months old, you pulled through. You were my, and your father’s, little miracle.

“You were always making me and everyone around you laugh. All of your friends adored you...You were my best friend...you looked after me just as I looked after you,” she said.

“You hadn’t a bad bone in your body, you were an angel living on earth.”

Addressing her deceased son, she said: “Please watch over me and your father and give us the strength to live without you. I promise you I will make you proud.

“I will let you rest now, sleep tight my love. I love you with all my heart. I will see you soon and I will hold you in my arms forever.” The congregation applauded.

Brooklyn’s father, Wayne Colbert, told mourners, “You were your mam’s pride and joy, the apple of her eye. You were such a polite and well spoken, caring and loving child,” he said.

Mr Colbert, a talented soccer player who had played with Limerick FC, broke down several times, whispering, “This is hard, this is hard”.

“Brook I loved every day we spent together...you made me the proudest father,” Mr Colbert told the congregation.

A letter written by the boy’s grandmother Terry Colbert read: “Grandad and I are heartbroken to have lost such a special boy...until we meet again, Brook, you will always be my angel.”

Mourners wept alongside members of the boy’s family as his coffin was carried out of the church to the Liverpool FC soccer anthem, You’ll Never Walk Alone.