Naval Service ship has rescued 3,376 people since May deployment in Mediterranean 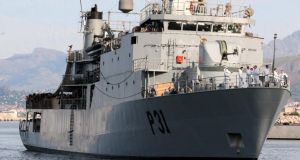 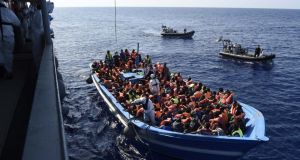 Minister for Defence Simon Coveney has said he believes it is “unlikely” that the Naval Service will extend its role beyond humanitarian assistance in the Mediterranean.

Paying tribute to the commander and crew of the LÉ Eithne for rescuing almost 3,400 migrants in the past six weeks, Mr Coveney said that the focus of Ireland’s effort was on search and rescue.

“I don’t anticipate that we are going to get involved in anything more focused from a military point of view than that,”Mr Coveney told reporters on the ship, berthed in the Maltese capital, Valletta, on Tuesday morning.

“ I think we are performing a very good role at the moment, and the ship here is very useful in that regard, and I’d be very cautious about going beyond that at the moment,”he said.

Mr Coveney, along with Minister for Justice Frances Fitzgerald and Minister of State for Development Seán Sherlock flew in to Valletta to visit the ship as it prepares to return home from the Naval Service’s first overseas humanitarian mission.

It will be replaced by the LÉ Niamh, which will remain on duty till late September, and Mr Coveney said it was “ possible”that the mission would be extended.

“But I think that’s a decision we need to make later on in the summer,” Mr Coveney said.

Ireland was also “two or three steps away” from making a decision on participating in a proposed EU NAVFOR anti-piracy initiative against people smugglers and traffickers on the Libyan coast, he said. The EU still has no UN mandate for such action.

“We’ve made it very clear that if that mission is to be extended beyond phase one which we are not part of for the moment, that would require a UN mandate for Ireland to be involved and I’ve have to go to government with that recommendation,” he said.

“What we are focusing on is bilateral co-operation – a humanitarian mission – with the Italian defence forces, and that has been hugely successful to date and that is what we are going to continuing to do until this autumn,”he said.

The former Naval Service patrol ship LÉ Aoife is also due to be delivered to the Maltese defence forces by early August, and is already under the Maltese flag as it prepares to leave Haulbowline, he said. Maltese naval personnel have been training in Ireland in recent months, he said.

Earlier, Mr Coveney addressed Cdr Pearse O’Donnell and crew on the LÉ Eithne and told them that Ireland was immensely proud of their efforts.

“So many Irish people up until recently had no idea what the Naval Service were capable of doing in Ireland. Now, literally, everybody on the street knows about the LÉ Éithne, and they talk about it in pubs and in clubs and at home,” he said.

The LE Eithne has conducted 22 operations , and rescued 3,376 people of various nationalities from overcrowded and often unseaworthy craft, with the youngest being a two-week old baby.

Some 2,664 of those have been male, while 533 were female and 179 were children, including small babies, of many nationalities, ranging from Eritrean, Nigerian, Sudanese and Syrian to people from Pakistan, Senegal, Egypt and Bangladesh.

They were among an estimated 150,000 who have embarked in unseaworthy and overcrowded craft from the Libyan coast so far this year.

Ms Fitzgerald praised the “exemplary professionalism of the crew of the LÉ Eithne”.

“We are proud of them and the work they are doing under the Irish flag,”she said. She said there were “no easy answers” to migration, which she described as “one of the biggest challenges facing the EU”, but said that Ireland was “committed to doing its part in solidarity with our fellow Europeans”.

She said the deployment of the LÉ Eithne showed the “real difference that Ireland, as a comparatively small member state, can make”, and pledged to “continue to do what we can when we can as the situation evolves”.

Asked if Ireland would take any more refugees as part of the EU response to the Mediterranean crisis, Ms Fitzgerald said: “we took our quota for this year, which is 220 for this year – which is 520 Syrians and Eritreans over two years.

“What’s presently under discussion is the relocation of the 44,000, which is only a small proportion of the overall number,” she said. However, accommodation in Ireland’s direct provision centres was almost full, she said.

“The EU is currently debating whether that would be mandatory or voluntary, and Ireland’s proportion that we would be requested to take from that number is approximately 600,” she said.

“I imagine that decision will be before the end of July. We are still in discussion at European council among justice and public affairs ministries in relation to the proportion that each country would be asked to take,” she said.

Mr Sherlock described as “very humbling” the “heroic work” of the Defence Forces, and said Ireland was making a “significant contribution to addressing the root causes of displacement, notably through our humanitarian and development assistance in the Horn of Africa and other regions of Africa, and the humanitarian support which we provide in Syria and the region.”

Documents recently released under Freedom of Information legislation to RTÉ indicate that Ireland did not support search and rescue missions in the Mediterranean – including Italy’s Mare Nostrum mission from late 2013 – at high-level EU meetings for two years before the LÉ Eithne was deployed to the region.

However, Mr Coveney said these documents were part of the briefing that any minister would get before council meetings on the “pros and cons” of various proposals, and would then make an informed decision.

The latest EU initiative was taken after an estimated 900 migrants drowned in the Mediterranean in April, making it the worst migrant disaster in European waters so far.

The LÉ Eithne has been working with an Italian co-ordinated migrant humanitarian search and rescue operation, along with British and German ships and other vessels, including a privately-run rescue operation based in Malta, the Migrant Offshore Aid Station (MOAS).

Malta, as the southernmost and smallest EU state, borders the area of operation some 45 to 60 kilometres off the Libyan coast. However under an agreement between Italy and Malta, most of the migrants are being landed in Sicily and southern Italian ports, with many then continuing their flight to other European states, including Germany and Sweden.

UN Human Rights commissioner Zeid Ra’ad al-Hussein had called for a “more humane, less mean-spirited response”, and urged EU states to take a “more comprehensive approach” which focused less on enforcement at borders and more on resettlement of some of the world’s most vulnerable people.

The UN commissioner described the EU’s proposed resettlement quota of 20,000 as “wholly inadequate to the magnitude of this crisis”, and called for “far greater emphasis on expanding channels for migration into Europe, including for low-skilled labour and family reunification”.

NUI Galway’s Irish Centre for Human Rights director Prof Michael O’Flaherty has said the EU’s proposed resettlement quota of 20,000 refugees is in “stark contrast” to the 100,000 people taken in after the break-up of Yugoslavia.

“Offering shelter to 20,000 people is a shadow of what Europe was willing to do 20 years ago,” he said last month.

Under EU law, Ireland and Britain have an automatic opt-out on most EU justice and home affairs legislation, which covers migration and asylum issues.