Minister urged to save key piece of Grand Canal basin 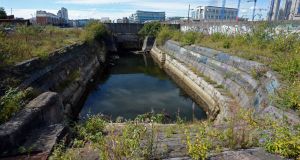 Waterways enthusiasts and a Dublin docklands business group have called on Minister for Heritage Heather Humphreys to save a key piece of the Grand Canal basin’s Georgian architecture.

The Inland Waterways Association of Ireland (IWAI) and the Docklands Business Forum have initiated a petition this week which asks Ms Humphreys to ensure the basin’s lock gates and graving docks for ships are “restored, preserved and reused” for community gain.

The cross-Border agency is primarily responsible for the Grand Canal Basin and for the surrounding area where the three graving docks were constructed for vessel repair, while Nama also has a lease interest.

The graving docks and lock gates are as important to the heritage of the area as Battery Park is to New York, according to Docklands Business Forum’s chief executive Alan Robinson.

“One sometimes get the feeling in this country that if we had Battery Park, we would have demolished it long ago,” Mr Robinson said.

The petition, the wording of which was handed to Waterways Ireland at an open day in Dublin earlier this week, also calls on Ms Humphreys to reserve the surrounding area for open recreational space, and to ensure that the Grand Canal Basin be developed into a public marina.

The forum’s plan states that as” important pieces of Dublin industrial and maritime heritage”, it would be “wholly inappropriate for the graving docks to be incorporated into an office or residential building”.

The plan notes that the basin is currently “under-utilised” and could become a “world class luxury yachting destination, facilitating over 300 yachts at any one time”.

Citing Les Berges de Seine in Paris and the Albert Dock in Liverpool as examples of successful maritime heritage projects, it argues that the European Commission has identified maritime tourism as a key growth area.

Waterways Ireland said it could not comment on the petition, but stated recently that it was “currently developing options” for the area known as city block 19, including the graving docks, to meet strategic development zone requirements.