O’Brien ‘deeply concerned’ about treatment of tenants in Phibsborough incident 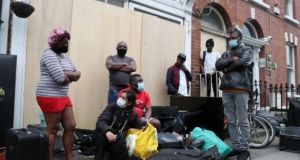 The Minister for Housing has asked the Residential Tenancies Board (RTB) to investigate the circumstances surrounding a controversial eviction that took place in Dublin last week.

Nine tenants were evicted from a house in Phibsborough after several men wearing all black, face coverings, caps and sunglasses entered the premises and instructed the tenants to leave before boarding up the front door and windows.

In a letter to the chair of the RTB, Darragh O’Brien said he is “deeply concerned about the treatment of the tenants concerned and wants to ensure that they are treated fairly, respectfully and within the confines of protections provided in the Residential Tenancies Acts”.

He directed the RTB to “fully investigate this incident and to make a report to me, with relevant recommendations, as soon as possible”.

He has asked that the RTB consider starting an investigation under its powers and also that it would “prioritise any dispute that may be brought to you by the affected tenants in relation to this termination”.

“On receipt of your report I will swiftly consider it and move to implement any relevant recommendations that will further protect tenants”.

Video footage taken at the event shows it was attended by a number of gardaí. There have been calls for investigations into the force’s role in the eviction.

The Garda has said it will undertake an urgent review of all the circumstances surrounding an eviction in Dublin last Wednesday.

In a statement released on Saturday, An Garda Síochána said it was “very aware of current public discourse” around the incident on Berkeley Road and that as an organisation gardaí must “listen and learn from our experiences”.

The force is “committed to delivering a professional policing and security service with trust, confidence and support”, said the statement.