Mary Noonan described as ‘focal point’ and ‘keystone of family’ 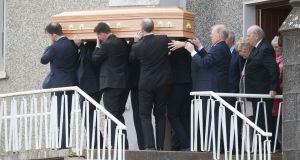 The funeral mass of Mary Noonan took place at the Church of The Assumption, Loughill, Co. Limerick The coffin leaves the Church followed by her brother Michael and other family members. Photograph: Press 22

Former Fine Gael leader and senior minister Michael Noonan has paid a tearful tribute at the funeral of his sister Mary, who was one of three women killed in a road crash last week.

Mary Noonan, (78), was driving herself and two friends Mary Costello (73), and Mary Griffin (70), to the writers’ festival in Listowel when they collided with another car.

Ms Griffin was airlifted to hospital from the scene and is making a steady recovery, it was heard.

Maeve Bradley (77), from Pallaskenry, who was driving the other car, and who also died at the scene, was cremated in a private ceremony this Monday, following her funeral mass.

The crash occurred just outside the village of Loughill, around 6.30pm, last Thursday. It is believed Ms Bradley may have suffered a heart attack before veering across the road and hitting the second car.

Ms Noonan’s funeral was held at the Church of the Assumption in Loughill, on a hill overlooking the shores of the Shannon Estuary.

The Taoiseach was represented by acting Aide de Camp with the Defence Forces, Cpt Angela Lyons.

Mourners included current and former TDs and ministers Mary Harney, Willie O’Dea, Paschal Donohoe and Patrick O’Donovan; as well as members of the judiciary including Supreme Court judge Mr Justice John McMenamin and President of the Court of Appeal, Mr Justice George Birmingham, who served as a minister of state under Garret Fitzgerald in the 1980s.

Leading a Mass of over 20 priests chief celebrant, Fr Tom O’Connor, head of the Kiltegan Fathers, and assisted by Loughill parish priest Fr Austin McNamara, summed up the mood as he addressed the Noonan family: “Our words count for little today but we hope our presence is a help to you.”

Michael Noonan thanked neighbours, gardaí, and emergency services for their efforts to save the women’s lives at the scene of the collision.

In a highly emotional reflection he prayed for all the families involved.

He said his sister had been the “focal point” and “keystone of the family”.

After momentarily being overcome with grief, he paused, and added: “We will miss her very much”.

Mary Noonan qualified as a nurse in England, and was later been stationed as health and safety nurse at the Aughinish Alumina refinery, Askeaton.

In a lighter moment, Mr Noonan told mourners his sister had delivered “innumerable children” at Limerick’s maternity hospital, which, he joked, had been “a great political asset” to him when he was canvassing in Limerick.

Drawing chuckles from the congregation, he continued: “The old ladies used to say to me your sister delivered all my babies, and when the babies were 18 years old, I used to remind them that they wouldn’t have been in the world at all only for my sister ...so it was a way of getting the number one vote”.

Mary Noonan had also qualified as an addiction counsellor in New York, and was later “in many a house in Co Limerick and North Kerry, helping families that were having a hard time from alcoholism”.

A bunch of flowers picked from her own garden were laid by her coffin, to symbolise her “love of nature and gardening”.

“We are returning her to Mount Trenchard to be be buried among the trees and wildflowers that she loved so well,” Mr Noonan said.

In Pallaskenry, Fr John Dunworth told Maeve Bradley’s heartbroken family the community would rally around them.

Speaking prior to the mass, Fr Dunworth said the adored mother of three had had spent her much of her life giving to others, “nursing in Saudi Arabia and in Oman”.

The reposing of Mary Costello will take place from 3pm-6pm this Tuesday at Shanagolden Church.

The mother of five will be laid to rest in Knockpatrick Cemetery following mass at 12pm onWednesday.

Gardaí have appealed for witnesses to last Thursday’s fatal collision, or anyone who may have dash cam footage of the incident, to contact them on 069-20650.

Snow and ice warning issued as communities battle floods 21:38
GP censured over failure to refer suspected meningitis cases to hospital 20:49
Shannon floods: ‘The only way they will get me out of my home is in a box’ 20:43
Ireland ‘lagging well behind’ in newborn screening programme for rare diseases 20:41
Fianna Fáil's Tom Brabazon elected Lord Mayor of Dublin 20:07

1 Why Sinn Féin will not call the State by its name
2 Coronavirus: Questions over Ireland’s readiness for what might come
3 Coronavirus: Irish citizens advised not to travel to Italy’s affected areas
4 Green Party the hottest date in town as government talks begin
5 GP censured over failure to refer suspected meningitis cases to hospital
Real news has value SUBSCRIBE