McDonald seizes initiative by reaching out to smaller parties 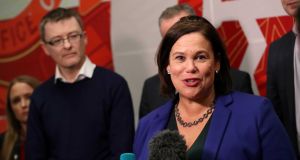 Sinn Féin will seek to discuss the formation of a coalition government with the Green Party, the Social Democrats, Labour, Solidarity-People Before Profit and Independent TDs in the coming days.

However, Sinn Féin leader Mary Lou McDonald on Monday night acknowledged that the seat numbers needed to put her party in position to lead a left-leaning government may not be there when all the 160 Dáil seats are filled.

With Fine Gael and Fianna Fáil reeling from a disappointing election which saw both parties suffer high profile seat losses as counts progressed on Monday, Ms McDonald seized the initiative in the process of government formation.

She has had preliminary contact with the leaders of the smaller parties as a prelude to negotiations on putting together what would be an extraordinarily diverse administration.

Ms McDonald played down a controversy over a recording of Sinn Féin’s Waterford TD David Cullinane ending a speech with pro-IRA slogans, though she admitted it was a “distraction” from the party’s agenda.

Mr Cullinane shouted “Up the RA! Tiocfaidh ar lá!” at the end of a victory speech to his supporters at a celebration on Sunday in Waterford, where he topped the poll by a large margin. The speech was filmed and circulated on social media.

Speaking to reporters before a meeting of the party’s ard comhairle in Dublin on Monday night, Mr Cullinane said that his comments were “about the past...not about the future”. He said he did not feel any need to apologise for them.

His party leader said: “I’ve asked everybody not to be making throwaway comments or comments that can be misconstrued or distract us from the work ahead, and I know that’s what happened in David’s case.”

Ms McDonald also said that “of course” she intended to talk to Fianna Fáil and Fine Gael about the possibility of government formation. Both parties had ruled out working with Sinn Féin after the election.

Asked if she would talk to Independents such as Michael Lowry and Noel Grealish who have supported governments in the past, she said the “obvious” people to talk to would be Independents “that share a political positioning” with her party.

She said that the question of a rotating taoiseach would be “part and parcel” of any negotiations with the other big parties.

Fianna Fáil TDs were tightlipped in public about the party’s prospects in the wake of seat losses and about the future of party leader Micheál Martin, although some privately acknowledged that he may have to stand aside.

The party is deeply divided over whether it should seek a coalition with Fine Gael or with Sinn Féin. It has ended up with 38 seats – well short of expectations of a seat haul in the mid 50s – and a view has taken hold among party TDs that it should enter opposition and allow Sinn Féin to attempt to form a minority government.

Galway East TD Anne Rabbitte and Longford-Westmeath’s Robert Troy called for a party meeting to discuss the election fallout. “Fianna Fáil is a party with options. We need to discuss all of the options,” said Ms Rabbitte.

Meanwhile, senior Fine Gael sources reiterated the view that they would not consider entering government with Sinn Féin, with some senior figures favouring a spell in opposition for the party after nine years in government.

Some party sources said a coalition with Fianna Fáil could come on to the agenda after some weeks if no other government was formed. However, the views among some TDs and defeated candidates have hardened against a grand coalition.

Carlow-Kilkenny Deputy and Minister of State John Paul Phelan said: “There will be no grand coalition. People wanted change, and that is what they voted for. I believe Fine Gael should go into opposition.”