Mayo dusts down collection of art on Famine 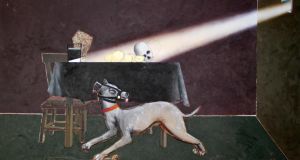 A painting by Michael Farrell at the opening of the Famine exhibition. Photograph: Trish Forde

When a south Mayo community invited Louis le Brocquy, Hughie O’Donoghue, Sharon O’Malley and other artists to interpret the 150th anniversary of the Famine, the result was a successful exhibition that toured Ireland and abroad.

Now almost 20 years on, a number of those artworks have been put on display again by the town of Claremorris in a bid to secure a permanent gallery.

As Patricia Noone of the George Moore Society recalls, the agricultural co-op Connacht Gold was the largest sponsor and the town’s old cinema was converted into a gallery.

The exhibition was opened by president Mary Robinson and subsequently toured to Cork, Limerick, Belfast and the United States.

A “famine suite” was also commissioned by the society from composer Charlie Lennon as part of the festival.

Mrs Noone says one of the society’s reasons for commissioning the art was to mark the fact that in 1846 – at the famine’s height – the writer’s father George Henry Moore, then an MP for Mayo, donated prize money from the Chester Gold Cup horse race to help alleviate the suffering of the tenants on his 10,000-acre Mayo estate. His horse named Coranna won the equivalent of €1.4 million in prize money and wagers, she says.

Cows for tenants
Moore immediately sent a message to his mother to buy a cow for each of the tenants or a calf for anyone who had a cow. The gesture has not been forgotten in south Mayo, she says.

In a programme essay, the then Irish Times chief critic Brian Fallon wrote the interpretations represented “the Irish mind and sensibility, not programatically or nationalistically, but through an interlinked series of individual responses”.

After the tour, the society bought 40 paintings, sculptures and drawings with the aim of having them permanently displayed. Such a gallery has not materialised, but the society’s collection has increased significantly in value. In a bid to revive its efforts, it is exhibiting half the collection in the privately-owned Claremorris Gallery, run Patricia Noone’s daughter Rosemarie.

At the opening on Saturday, Minister for Arts, Heritage and the Gaeltacht Jimmy Deenihan commended the town for its efforts. “We have come such a long way since that desolate time, but it is important that we do not forget our past and the experiences that have shaped us as a people,” he said.

The George Moore Society’s Famine Collection can be seen at Claremorris Gallery until April 30th.