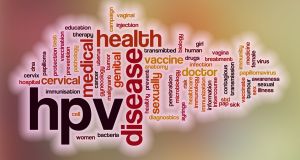 Most Irish people are unaware the human papillomavirus (HPV) can cause cancer or that a vaccine exists to prevent these forms of the disease, according to a new survey.

Every cancer linked to HPV could be eliminated in the same way as polio and smallpox through available vaccination programmes, according to the chief executive of the Marie Keating Foundation.

Liz Yeates said parents needed to be reminded of the importance of ensuring their daughters received the HPV vaccination, which has been the subject of controversy in recent years.

Every year 335 women and 85 men in Ireland are diagnosed with a HPV-related cancer and up to 130 die from such cancers.

Marking the first international HPV Awareness Day on Sunday, Ms Yeates said it was very concerning that only 62 per cent of school-aged girls were vaccinated. This figure has fallen from more than 80 per cent as a result of a campaign of opposition by some parents who allege it is to blame for their daughters’ chronic illnesses, though no scientific evidence exists to back up this claim.

The vaccine is provided free to girls aged 12 by the Health Service Executive.

Research carried out to mark the awareness day shows 65 per cent of Irish people do not know that HPV can cause cancer and 59 per cent are unaware that a vaccine exists to prevent such cancers.

The Behaviour & Attitudes survey of 1,000 people commissioned by pharmaceutical giant MSD found 87 per cent of Irish adults believe they have never or will never be exposed to the HPV virus, according to the research, even though almost all adults will get the virus in their lifetime.

Obstetrician Prof Ray O’Sullivan said, “we all get HPV once we become sexually active but some of us may unfortunately get the type that causes penile cancer, head and neck cancer, throat cancer and cervical cancer”.

He appealed to parents to get their children vaccinated before they became sexually active.

Thousands of women over the next 10-20 years will be saved by vaccination, he said.

Other women will be saved “a lot of misery” because treatment to deal with abnormal cells “weakens the cervix and they will lose pregnancies early on”. Prof O’Sullivan, consultant senior lecturer in obstetrics and gynaecology at St Luke’s Hospital, Kilkenny, said the HPV vaccination is the “most studied vaccine in human history”.

“There are 250 million doses given around the world. The World Health Organisation said it is an extremely safe and effective vaccine. The Centers for Disease Control in the US said the same thing.”

The Health Information and Quality Authority (Hiqa) is currently conducting a health technology assessment on extending the vaccine to boys and will make recommendations to the Department of Health in the autumn.

Paul Flynn: I’d crawl over a mountain of nouveau-riche club sandwiches for a nice toastie
Real news has value SUBSCRIBE