'Great British Bake Off' star says: ‘I was brought up on Irish Stew’ 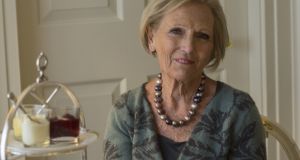 Mary Berry said people responded to Storm Ali ‘in a very Irish way and were very cheerful about it’. File photograph: Brenda Fitzsimons

Mary Berry was an unlikely victim of Storm Ali after her highly-anticipated take off at the National Ploughing Championships fell as flat as an undercooked soufflé with high winds causing the abandonment of Wednesday’s proceedings.

The television chef who was the star of the Great British Bake Off on the BBC for almost a decade said she was disappointed to have missed her debut at the ploughing but said she would be flying home to the UK with her love of Irish food undiminished.

She was brought to Ireland by the National Dairy Council on Tuesday night and was scheduled to take part in a meet and greet with fans at an event dubbed Dare to Dairy with Mary.

As part of her appearance she was to cast her eye over afternoon tea prepared by three finalists and had planned to share a cup of actual tea with the Queen of the Ploughing, Anna May McHugh.

“We were in the carpark and ready to go when we got word it was being called off due to the bad weather,” she told The Irish Times. “It couldn’t be helped and I think people responded in a very Irish way and were very cheerful about it.”

While she has never been to the ploughing she said she was very familiar with Irish cooking and with Irish farming.

“I think Irish cuisine relies very much on local produce and I think that’s so important because we all like to know where our food comes from.”

She said in the UK there was “much more imported food and it is lovely to see so much local food, particularly lamb and beef and dairy products”.

She said she was “brought up on Irish stew” and still loves it although her own recipe is somewhat untraditional and relies on fillet of lamb with the bones removed.

“I know its not very traditional, but you have to move with the times don’t you?” she said.

When asked if she had any concerns about what might happen to British food in a post Brexit world she played it down. “I will wait and see what happens but it’s not keeping me up at night.”

Nor does her absence from the Great British Bake Off, which moved controversially from the BBC to Channel 4 two years ago, cause her any sleepless nights. “I was there for seven years and I enjoyed every day of it but I have kept busy since then and I am very lucky to be so busy.”