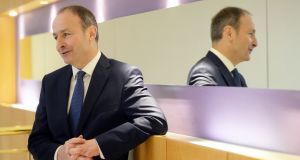 Micheál Martin: he said the “slash and burn approach” by former minister for the environment Phil Hogan in abolishing town councils was not a progressive move. Photograph: Eric Luke

Modernising local government is essential to tackling a crisis in governance and combating the rise of populism which has led to Brexit and the election of Donald Trump, Micheál Martin has said.

The Fianna Fáil leader said last year had been a watershed year across the globe, with a deep sense of disillusionment and alienation, fostered by economic stagnation and the sharp end of globalisation. It had put the western model of democracy under a pressure not seen since the end of the second World War.

He was speaking at a symposium entitled “The Challenge of Local Government Modernisation” at University College Cork.

Mr Martin said that allowing people and communities to take control of their local areas was vital in arresting the slide into cynicism that could undermine the structures of the State.

“Dispersing power to the appropriate level of governance from supranational bodies such as the EU down to the lowest tier of government is critical to ensuring that people are not isolated from the decisions that shape their lives.”

Mr Martin said problems like climate change required high-level co-operation but they must be matched by giving lower tiers of government responsibility for the decisions that shape their local areas.

Similarly “the bigger is better” philosophy which drove the Smiddy report on local government reform in Cork where it was proposed to merge Cork City Council and Cork County Council was “not the way forward”, said Mr Martin, as he reiterated his opposition to such a move.

Mr Martin said Fianna Fáil was proposing to reshape local government, including setting up a commission to establish a new town council structure together with the creation of new community councils.

The party was also in favour of introducing directly-elected mayors, a move which would enable citizens to identify with the office holder who would provide direct accountability and leadership on key issues and help cities become drivers for economic growth.

He said Fianna Fáil was in favour of the local property tax being earmarked for the new town council, while a new sugar-sweetened drinks tax should be ringfenced for local authorities to invest in community infrastructure.