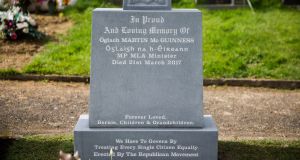 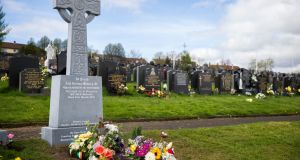 Unionist politicians have claimed that a new headstone unveiled at the grave of Martin McGuinness proves the Sinn Féin politician remained an IRA member until his death.

East Derry DUP MP Gregory Campbell said the headstone’s description of Mr McGuinness as an “óglach”, the term the IRA uses for its members, challenged the “hyperbole” that built him up as a statesman after his recent death.

UUP politician and former British army officer Doug Beattie also said the “reality was that Martin McGuinness remained wedded to the IRA until he died”.

Mr McGuinness’s headstone was unveiled at the republican plot at Derry City Cemetery on Easter Sunday.

“Óglaigh na hÉireann” is a name the IRA uses for itself.

The Celtic cross headstone includes a quotation from Mr McGuinness: “We have to govern by treating every single citizen equally.”

It also contains the message: “Forever Loved, Bernie (his wife), children and grandchildren.”

An inscription on the grave’s footstone reads: “I love you with my whole heart and soul.”

“Martin McGuinness, whose heart came alive and kept faith with the Bogside.

“Martin McGuinness, who fought, who made peace and who will never be forgotten. Martin led from the front, he took risks for freedom and risks to build the peace.”

Mr Campbell said on Monday that the IRA references on the headstone would come as “no surprise” to most people.

“For those who were caught up in the hyperbole at the time of his passing and burial, however, it ought to serve as a reality check,” he said.

“The inscription of ‘volunteer’, along with the use of the Irish term for the ‘IRA’, are there as lasting testimonies to terror.

“Long after the eulogies have faded, those who got carried away with some of the media’s attempted elevation [of Mr McGuinness] to statesmanship can now see for generations to come what those closest to him want everyone else to remember him as.”

Mr Campbell also referred to the IRA murders in Derry of Patsy Gillespie, who was used as a human bomb in 1990, and of census-taker Joanne Mathers in 1981.

“A volunteer in Irish republican parlance didn’t work in a charity shop, they terrorised people, they strapped an innocent man to his car and turned him into a human bomb, they shot a young innocent woman collecting census forms. That’s what a ‘volunteer’ in the IRA did.

“The only good that can come from this engraving is that now those who are prepared to look for the unvarnished truth can do so, on a headstone that will be there for generations to come.”

Mr Beattie said that people believed the former deputy first minister “became a politician or he became a statesman, but the reality was that he remained wedded to the IRA until he died.

“People allowed themselves to be duped. People looked and thought, ‘Look, he has moved on and become a politician now and everything he did in the past was in the past’. What I am saying is that it wasn’t.

“I find it hard to harmonise the two sides of Martin McGuinness.