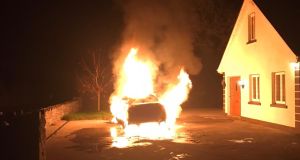 The car is seen on fire outside the family home. Photograph supplied by Brian Farrell

One of the first people Sinn Féin TD Martin Kenny thought of when his family car was set alight outside his home while his wife and three of his children slept was Kevin Lunney, the Quinn Industrial Holdings executive who was abducted and savagely attacked near the Border last month.

Awakened by “flashing lights” and “a hissing sound” at 2.15am on Monday, Kenny looked outside to see flames “licking up as high as the roof”. Quickly, he called 999, while his wife, Helen, roused their three youngest children, Eabha (18), Claire (17) and Pearse (15), fearful that the house might go on fire.

Initially he was unsure what had happened. Within minutes, however, he realised it was a deliberate act. Cars, he said, do not often go fire spontaneously – “well, probably not my car, in front of my house, at this particular time”.

Then he thought of Lunney, abducted and tortured by a group of masked and armed men on September 17th on a roadway in Co Fermanagh as he drove home from work. “I realised this is mad,” Kenny says.

Luckily. earlier that day his son had parked outside the front door so Deputy Kenny’s car was farther away from the house than usual: “If it had been closer, the house could have gone on fire,” says the Sinn Féin spokesman on justice and equality.

Front-door glass cracked in the heat, while traces of burnt rubber and plastic were still evident in the front yard on Tuesday. He and his son Pearse had used a hose to douse the walls of the house.

The family live on a quiet country road in Aughavas, Co Leitrim, just 11km from Ballinamore. So quiet is the road that just one car passed for the full 90 minutes it took the fire brigade to put the blaze out.

Neighbours had quickly gathered, alerted by the screams of the family. “There were seven or eight loud bangs, almost like gunshots, probably as the tyres exploded and the car windows came in. Then the neighbours’ lights started to come on,” Kenny recalls.

Eoin, alerted by a telephone call, rushed to the family home to find Garda cars and flashing lights. “It wasn’t too bad for me, as the fire had been put out by then, but the girls were crying and Mam was crying,” he says.

“We were shocked, frightened and amazed, to be honest,” says Martin Kenny. “But at the same time we are strong. We have come together and we are fine and we will not let it be the defining moment of anything.

“You don’t let anybody who comes in the middle of the night and does that define anything about your life. That is the decision we all made,” the TD says.

“One of my girls said that at least we are not trying to get into a container or get on to the back of a truck to find safety. We are safe,” he adds, referring to the tragedy last week in Essex when 30 illegal immigrants were found dead in the back of a truck.

But safety is not being taken for granted. The property is not protected even by a gate. That will change. “We have a guy coming today. We will look at cameras and at putting lights up, and other measures.”

This week Kenny is working from home as the Dáil is on a midterm break, but leaving next week for Leinster House will be tough, especially since he has “no clue” about who attacked him, or how far they travelled.

He is not blaming anyone who has disagreed with him over whether asylum seekers should be housed in Ballinamore or not. “The only people who are responsible for this is the person or persons who did it.”

However, lessons must be learned from Ballinamore, he says. “I do not want to be critical of people, but there are lessons to be learned. I think it is very irresponsible, and very regrettable that people have been fired up.”

Asked if the Ballinamore Community Group should now end their 24-hour protest, he says: “That is up to them. I certainly did not ask them to put it there. If they are big enough to decide to do it, they should be big enough and have enough cop-on to know what to do now”.

Following the attack on Monday, the Kenny family kept out of the spotlight as they came to terms with it. “We pulled the curtains and watched a Harry Potter movie. That is a favourite thing to do in this house,” says Kenny.

His burnt-out car was towed away quickly once the Garda forensic team had finished examining it. “I wanted it taken away quickly as it was too much of a reminder of what happened,” he says.

Messages of support have come thick and fast and have helped. “This is not a funeral, it’s not a corpse house, nobody is dead,” he stresses, although the last few weeks even before the arson attack have been hard.

“I have come through criticism and demonisation with a lot of scurrilous, made-up lies which some people choose to believe,” he adds, angered that some locally have falsely claimed he has a financial interest. “People said I was going to make millions out of it – all lies.”

The scale of the opposition in Ballinamore, illustrated by the 350 people who came to a public meeting, still disturbs him. “I am shocked by it,” he says. “I still cannot believe it, I was totally taken aback.”

For now, he hopes others will speak up. “I know people who are generous and decent who have supported this [protest] and who have reasons for concern, but I think those people should really realise it is gone beyond the beyonds.”

Campaigners in Ballinamore, angered that they had not been consulted, argue that the 25 apartments to house up to 130 asylum seekers are a “compound”. Kenny disputes the description: “When those apartments were advertised first they were advertised as ‘luxury apartments’.

Neither is he convinced by the repeated calls that Ballinamore is ready to accept a “proportional” number of asylum seekers. “If there were 100 retired American millionaires coming to live in the town, I wonder would that be regarded as out of proportion.”

His family support him. Of watching his father in the Dáil last week, Eoin says: “I thought some people might be angry at that, but it is worth standing up for what you believe in. If there is a stone thrown through the window, I think he should keep going. This thing is bigger than us.”