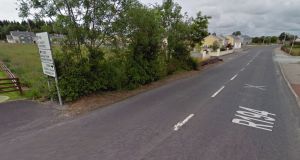 Ballinalee Co Longford. A man in his 80s has died after a fire in a house in the area. Photograph: Google Maps

Gardaí are investigating a fire at a house in Co Longford in which a man in his 80s died.

They were called to the scene of the fire in Ballinalee shortly before 7pm on Friday evening. Local fire services were in attendance and the man, the sole occupant of the house, was pronounced dead at the scene.

His body was removed to the Midland Regional Hospital in Mullingar for a postmortem.