Derek Keenan pleaded guilty to possessing 2.99kg of heroin with street value of €418,000 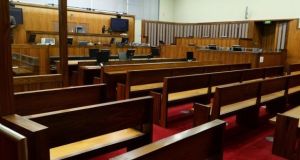 Det Sgt Mick O’Halloran told the court: “This was the largest quantity of heroin ever seized by gardaí in any operation in Cork.” Photograph: Cyril Byrne

A 42-year-old man described as “a key player” in the heroin trade in Cork has been jailed for eight years after he was caught with the largest ever quantity of the drug seized by gardaí in the city.

At around 11pm on the day in question, Keenan was observed sitting in the driver’s seat of his car in the driveway of his home when he was joined by another man who got into the passenger’s seat.

Gardaí arrested both men and conveyed them to a local garda station and Keenan made admissions and took responsibility for both gear bags of heroin which had a combined street value of €418,000.

“This was the largest quantity of heroin ever seized by gardaí in any operation in Cork,” said Det Sgt O’Halloran, adding Keenan admitted receiving the drugs earlier that evening from a man who was paid €600 for the delivery.

Gardaí found a number of text messages on Keenan’s phone regarding the sale and supply of heroin in Cork and he told them he was awaiting instructions on what to do with the remaining heroin after giving a kilo to the other man.

“The accused was a key player on the heroin scene in Cork - his activities have brought a lot of heroin on to the streets of Cork and 3kgs is a substantial amount for Cork city - we would not usually see such quantities here,” he said.

Det Sgt O’Halloran said that Keenan was co-operative in that he admitted his own involvement and took responsibility for the drugs but he did not go any further in terms of identifying where he got the drugs or planned to sell them.

“He did put his hands up at an early stage but he was effectively caught red-handed”, said Det Sgt O’Halloran, adding Keenan had 29 previous convictions including seven for drug possession for personal use and two for drug dealing.

Det Sgt O’Halloran agreed with defence barrister Donal O’Sullivan BL that Keenan was himself a heroin addict and was on both heroin and a methadone programme at the time of his arrest for this offence.

But he disagreed with a suggestion from Mr O’Sullivan regarding Keenan’s claim he had the drugs to help him pay off a €6,000 drugs debt after a threat as the quantity of drugs involved was simply far too large for such a small debt.

Mr O’Sullivan pleaded for leniency with Judge Sean O Donnabhain, saying that his client had indicated he would be plead guilty at an early stage while he had also been of good character up to 2014 when he became addicted to drugs.

Judge Sean O Donnabhain said that Keenan had been dealt with appropriately and leniently on two previous drug dealing charges by the courts but this quantity of drugs on the current charge brought it to a different level entirely.

“Gardaí say that it was a very significant seizure - one of the largest heroin seizures ever in the city and the accused appears to have been centrally involved in the organisation and distribution of the drug in Cork.

“He was caught red-handed and he did make admissions about his own involvement but he didn’t go any further than [THAT]but I am not going to hold that against him - he was waiting on instructions what to do,” he said.

He believed a 10- year sentence was appropriate but he was willing to suspend the final two years on foot of Keenan’s guilty plea and he backdated the eight-year term until July 17th when Keenan first went into custody on the charges.

Judge O Donnabhain struck out similar charges against the passenger in the car, Anthony Cuthbert (57) from St Finbarr’s Road, Greenmount after gardaí confirmed that Mr Cuthbert had died in December.