‘It feels like we’re accelerating the ship towards the iceberg,’ says Dr Tomás Ryan 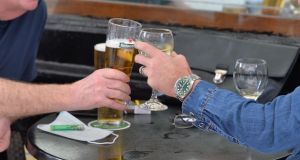 Customers enjoy a pint and a glass of wine after a meal at The Duke pub on Dublin’s Duke Street on Tuesday. Photograph: Alan Betson / The Irish Times

Public health experts are not toasting the Government’s go-ahead for “wet” pubs to re-open.

“I’m surprised at the decision, given the case numbers are creeping up and the chief medical officer is warning people in Dublin and Limerick to be specially vigilant,” says Prof Ivan Perry, dean of the school of public health in University College Cork.

“I’m sceptical too. Now is not the time to be opening pubs. Given the close contact, the noise, the indoor environs, the loss of inhibition with alcohol - the general hubbub - they are ideal places for the virus to flourish.”

Prof Perry said he understood the economic urgency behind the move to reopen pubs but he warned the move could turn out to be “a false economy”.

“You only have to look across the Atlantic to see what happens when you have an unrestrained rush to reopen the economy early. We may not have rushed things but we have fudged them.”

A minority of pubs serving food failed to comply with the regulations that were in place, he points out. “It only takes small numbers with this virus and you’re at risk of superspreader events.”

Dr Tomas Ryan of the school of biochemistry and immunology at Trinity College Dublin said he could not understand the rationale behind the Government’s decision, “even if case numbers aren’t currently rising”.

“We’re opening three things at the same time - schools, colleges and now pubs - so it’s going to be very hard to disentangle trends, to tell what action caused what rise in cases.”

It is only three weeks since public health officials implemented the last set of measures, he pointed out, and therefore too soon to see how they are working. “We’re doing a lot of things at the same time so it will be difficult to determine the outcome.”

It might have been better, given current trends, for the Government to have waited until October and then to relax restrictions in the sector on a county by county basis, he suggested.

“It feels like we’re accelerating the ship towards the iceberg when maybe we need to be angling our direction so we’re not pointing straight at it.”

Prof Paul Moynagh, an immunologist at NUI Maynooth, said that whatever decisions are taken about lifting or imposing restrictions, they should be “driven by the data”. This would look at the number of outbreaks linked to particular settings, and be based on an assumption that some risk is always involved.

“I haven’t seen any data to suggest the pubs that have been serving food were major sources of outbreaks,” he said.

While suggesting early summer, when levels of transmission were low and schools were closed, might have been the right time to re-open pubs, he asked: “When is there ever going to be a right time? We can’t let the virus dictate our lives forever, so we’re going to have to learn to live with it.”

However, the situation was different for nightclubs, he stressed, and these should remain closed.

Up to the end of August, there were just two outbreaks in hotels and five in pubs, and all these investigations were closed, according to the HSE. Investigations into five outbreaks in cafes/restaurants remain open.

Prof Sam McConkey said the idea was fine if implemented under strict rules and in a cooperative and physically distanced way.

That meant outside or in groups of six or less, more than two metres apart, “sitting down, very limited households together, table service only, patrons wearing masks when entering leaving and moving to the toilet, and servers wearing face masks too,” he said.

“There should also be open ventilation, no singing shouting and low or no community levels of circulating Sars 2.”