Magnificent Midlands? Wild Atlantic Way-style branding for the middle of Ireland on way 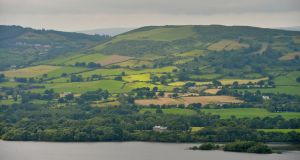 Lough Derg near Killaloe, Co Clare. Fáilte Ireland plans to build a brand for the midlands similar to that of the Wild Atlantic Way. Photograph: Alan Betson

Fáilte Ireland has advertised for consultants to help the organisation build a brand for the midlands to emulate the success of the Wild Atlantic Way and Ireland’s Ancient East.

The proposed brand, which has been in development at Fáilte Ireland for a number of years, would cover an area of the midlands, at least as far south as Killaloe and Ballina on the Tipperary-Clare border.

The area mentioned in documentation would appear to run south from Cavan down to Killaloe in Co Clare and west from Westmeath to east Galway.

Plans for the new brand were first revealed by then minister for state for tourism Patrick O’Donovan at the Irish Hotels Federation Conference, in February.

However, Fáilte Ireland later declined to provide details of the project on the basis that it was still in development.

Consultants Colliers, Red C and DKM produced a feasibility report in April, and this week the tourist authority advertised for consultants “to design a range of visual identities for a new experience brand for the Midlands”.

It is understood that the “experience brand” includes the notion of slow tourism, with a focus on walking, food, cycleways and water-based blueways. The recently opened Athlone to Mullingar cycleway along with the old railway line is in the area covered by the proposed brand, as are parts of the Shannon and Royal Canal blueways.

According to documents released to The Irish Times under the Freedom of Information Act (FoI), the towns of Killaloe and Ballina, which straddle the Shannon at the foot of Lough Derg, “are very much in the geography” that was being considered by the Colliers/Red C/DKM report.

The documents also include copies of correspondence from Fáilte Ireland chief executive Paul Kelly reassuring assistant general secretary of the Department of Tourism Ken Spratt on “Fáilte Ireland’s commitment to the region”.

Mr Kelly said while Fáilte Ireland was developing a long-term strategy, it would continue with supports including a television advertisement featuring Athlone Castle and boating on the Shannon; financial support from 11 festivals from Cavan to Killaloe; and enterprise supports for the region including the Hill of Uisneach visitor centre in Co Westmeath.

In an internal email, Mr Kelly points out there “have in the past been changes of strategy/direction around this area” and outlines the timeframe as “getting into market for 2018”.

In its call for tenders to design “visual identities”, Fáilte Ireland said over the last four years it had developed three “experience brands” [the Wild Atlantic Way, Ireland’s Ancient East and Dublin: A Breath of Fresh Air] with the purpose of providing visitors with motivating experiences and destinations of distinction.

“While we are still working through the research and identifying the most appropriate proposition/concept we now want to get in place a supplier who when the time comes can develop a name and a brand identity that encapsulates what this region of Ireland has to offer and what is motivating to the potential visitor,” the tender document said.

According to the documents, it was hoped signage for the the brand would be “getting into market for 2018” while capital projects could “take many years”.

The documents said “the budgetary process cannot be stressed enough” and funding was discussed with Minister for Tourism Shane Ross, who held a number of meetings with Fáilte Ireland on the subject.

According to internal emails, Fáilte Ireland said the “pay ask” was for 2018 and a commitment for three years. The need to recruit staff in 2017 to be ready for 2018 was mentioned and the estimated “pay ask” in 2017 was €90,000. Non-pay elements would be in addition to this, the documents said.