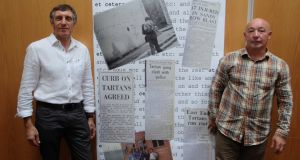 The difficulty getting former loyalist paramilitaries to express themselves through the arts was highlighted yesterday by a Northern Ireland playwright who served a life sentence for murder during the Troubles.

Robert Niblock, a former Red Hand Commando, has had two plays, Reason to Believe and Tartan, produced to wide acclaim. He told an audience in Dublin he did not know why there was reluctance among former loyalist activists to express themselves artistically. He helped run a web forum for former loyalist prisoners called longkeshinsideout.co.uk.

“It has stopped at the moment because I can’t get contributors. But privately, they’re telling me brilliant stories. They’re very creative, right across the arts. But trying to get them to . . . I don’t know what the problem is and I don’t know how to solve it,” he said.

Recently, he produced a booklet, Postscript, in which he and four other loyalists told stories but the others wanted to remain anonymous. “I don’t know how to overcome that barrier,” Mr Niblock said.

He was speaking at a forum, Our Friends from Belfast, in Liberty Hall, organised by cross-community worker and former Irish Times journalist Andy Pollak, and Dublin community activist Mick Rafferty and supported by the Glencree Centre for Peace and Reconciliation.

Among the audience of about 30 yesterday was former IRA prisoner-turned-writer Anthony McIntyre who said there was a deficit in what was known of the loyalist experience.

“Loyalists needs to be writing about the type of things that motivate them, the type of things that guided them,” he said. When loyalists did write about their experiences and feelings, he noted, “they write with a zest and a kind of brilliance that quite often can go unrivalled but, compared to republicans, there seems to be a reluctance [to write]”.

Mr Niblock grew up in east Belfast in a community that was strongly loyalist and expressed itself through organisations such as the Orange Order. As a young man, he became involved in loyalist paramilitarism.

Fellow playwright Peter Sheridan, who moderated a conversation between Mr Niblock and the audience, noted that two days ago, “the last British detainee” was released from Guantanamo. Referring to Mr Niblock, he said “here’s this guy, released after 15 years in Long Kesh”.

Mr Niblock was jailed first for possession of explosives and secondly for the murder, in February 1975, of fellow loyalist John Thompson. Thompson’s head was bludgeoned, his throat slit and his chest stabbed 52 times.

For Mr Niblock, Long Kesh (the Maze Prison) was “a mini Sandhurst” where loyalist leader Gusty Spence trained “soldiers”. He was released in 1990, and said in the 1970s and 1980s he and others had come to the view that violence “wasn’t working for either side”.

“It wasn’t a light-bulb moment but gradually you morphed this idea that, ‘oh, hold on, that’s wrong’,” he said. “They certainly had doubts about what they’d done and . . . knew that whatever they’d done, it hadn’t worked.”

Mr Niblock is writing a play about loyalist politician David Irvine whose integrity he admired. He said establishment unionist politicians did not represent the loyalist working class and displayed contempt for them, especially when it came to the arts.

“There’s always been this notion that Prods, for want of a better word, see the arts, and theatre in particular, as belonging to the middle class and to the Fenians. I think it’s wrong ,” he said.

He implied there was more in common between the divided working class communities of Belfast than perhaps either admitted.

“There was a very skinny line between the Orange and the Green in Belfast [during the Troubles],” he said. “In many ways it was a class war and the figures to back that up are probably 99 per cent of the people who went through the whole system, and there were over 30,000 people during the conflict, were working class. The vast majority of people who were killed during the Troubles were working class, whether they were military or civilian. The people that I went through the prison system with were no different really, other than allegiances.”