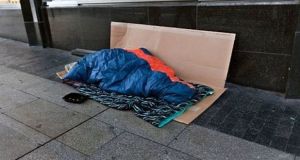 Provision was ‘not a solution’ to people getting back into independent accommodation. Photograph: Getty Images

Long-term stays in emergency accommodation are not helping homeless people overcome the factors which forced them into homelessness in the first place, according to Cork Simon Director, Dermot Kavanagh.

Mr Kavanagh said that the latest research report from Cork Simon based on one-to-one interviews with 24 men and 12 women staying at Cork Simon’s emergency shelter showed that such provision was not a solution to people getting back into independent accommodation.

“It’s clear that long-term stays in emergency accommodation aren’t good for anyone. The vulnerabilities that pushed people into homelessness in the first place are exacerbated further by being stuck in emergency shelters for far too long with no way out,” said Mr Kavanagh.

“We need to put our energies into housing people as quickly as possible, so they have a safe, secure environment in which to overcome those vulnerabilities effectively, reconnect with family and start participating again in the wider community. People deserve better.”

The report, Last Resort: Vulnerabilities, Resilience and Quality of Life in a Homeless Population, compiled and written by Joe Finnerty, Senior Lecturer at the School of Applied Social Studies, University College Cork, was launched this morning by former Green Party TD, Dan Boyle.

Mr Finnerty said the report was based on a total of 69 one-to-one interviews with the 36 residents using Cork Simon’s emergency shelter over an 18-month period with 26 of the residents being interviewed twice or more.

He said the research identifies their routes into homelessness, explores some of the vulnerabilities that set them on that journey and highlights how their experiences of long-term stays in emergency accommodation have added to their vulnerabilities, particularly around social exclusion.

“There were high levels of vulnerability among participants, particularly around lifetime heavy use of alcohol or drugs, low levels of educational attainment, high levels of social isolation, poor mental and physical health, low morale and a deep sense of there being little hope for the future.”

Mr Finnerty said that among the findings were that more than half of respondents had been staying in the emergency shelter for more than six months while almost 60 per cent had been rough sleeping immediately prior to their current shelter stay.

The research, which found that a quarter of respondents had a history of state care and more than a third had left school before or on completion of their Junior Cycle (or equivalent), also found that 80 per cent of respondents reported high levels of lifetime heavy use of alcohol and drugs.

While alcohol and drug issues, along with mental health problems (a third reported having received a diagnosis of mental illness of some kind) fitted the traditional route into homelessness, their plight was exacerbated by more recent structural factors, such as the precarity in housing and labour markets.

He said that “Last Resort” highlights the social exclusion and stigma experienced by respondents as a result of being homeless with around 28 per cent reporting that they “seldom or never” saw family or friends, they had no one to call on in an emergency or that they “liked to keep to themselves”.

“The participants have good levels of engagement with addiction and other services, with many lifetime heavy users of drugs and alcohol now either abstinent or in treatment. They are strongly motivated to find independent accommodation or to address ongoing addiction issues first.

“Frequently mentioned by participants as something to achieve in the next 12 months were remaining or achieving abstinence from drugs or alcohol, having access to or custody of children, and starting or continuing training and education.”

“Last Resort” found the most common barriers to finding accommodation included the poor quality of flats available, the narrow range of accommodation where Housing Assistance Payment is available, discrimination by private landlords against homeless people and long waiting lists for social housing.

“The lack of independent accommodation is causing the study group to spend longer periods of time than necessary in emergency accommodation. The result is that the opportunity for improvements to their mental and physical health and reduction in their alcohol and drug use is unavailable to those forced to continue residing in emergency homeless accommodation.”