There has been an increase in anecdotal sightings of urban foxes 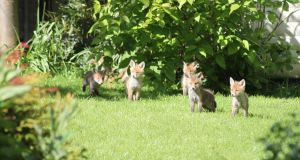 You wait two years for a fox and then eight come along at once.

Denis Donohoe had a den of foxes in a hole under his wooden garden shed in Dún Laoghaire.

Two years ago a family of foxes appeared at the bottom of the garden and then promptly disappeared.

None returned last year, but this year Mr Donohoe was astounded to see eight young cubs emerge from the same den.

The mystery deepens as there is no sign of either the mother or father. Foxes tend to live together in families.

“We have a passage along the side of the house. We have one who stands guard and allows the other to explore out the front,” he says.

“The sunshine brings them out in the morning, but once the neighbourhood wakes up, you don’t see them.”

Mr Donohoe says there has been a lot of sightings of foxes in Dún Laoghaire, but he is the only one with a den in his back garden.

Fox expert Holly English said a fox litter usually consists of about five cubs, and eight is larger than normal.

Ms English, a PhD student and zoologist at UCD, explains that this is an “incredibly busy time” for foxes as cubs are born following the mating season which lasts from January to March.

Cubs which were born the previous year will often help out their parents in scavenging for food for the new arrivals.

There has also been increase in anecdotal sightings of foxes in city centre locations during the lockdown.

Mr Lanigan had intended to take photographs of streets empty due to the Covid-19 pandemic. The streets were empty, but of humans, not a fox which ambled down Fleet Street in Temple Bar with a pigeon in its mouth.

The fox is known as Sam, according to Trinity College Dublin zoologist Collie Ennis. It is about 11 months old, he reckons, and has a mangy tail.

Mr Ennis said Sam’s parents inhabit a territory around Merrion Square and he is wandering around because he has been kicked out of his den.