Hospital death toll for disease reaches 387, as total cases increase by 69 to 3,836 in North 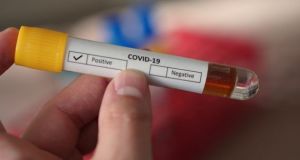 Six more coronavirus-related deaths have been recorded in Northern Ireland, according to figures released on Monday by the North’s Department of Health (DoH).

It brings the total number of hospital fatalities to 387.

The figures include five deaths in the 24 hours until 9.30 on Monday morning, as confirmation of a further fatality, which had already taken place but which had not previously been reported.

An additional 69 patients tested positive for coronavirus out of 1,103 individuals tested in the last 24-hour period, bringing the total number of confirmed cases in the North to 3,836.

The statistics released daily by the DoH include only deaths in hospital, where there has been a positive test for coronavirus.

An additional set of data is released weekly by the Northern Ireland Statistics and Research Agency (NISRA) and records deaths in all settings including care homes and hospices.

According to figures released by NISRA on Friday, the number of fatalities in Northern Ireland is at least one-third higher than the figure reported daily by the DoH.

NISRA recorded 393 coronavirus-related deaths in the period until April 24th, as compared to 299 recorded by the DoH.