Locals protest against the closure of Cork credit union 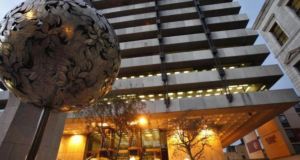 A protest by Berehaven Credit Union (BCU) members in Castletownbere offered a glimmer of hope for locals reeling from the loss of the service.

A crowd of up to 200 protesters were told that negotiations between the liquidator and another credit union were at an ‘advanced stage’ with a view to securing a future credit union service for the town.

“The hope is that we will have a functional credit union up and running in a few weeks. That’s according to information given to me by Noel Harrington (local FG TD,)” organiser of today’s protest, Georgina Goulding said.

Business owners, families and young people who have used the service to ‘tide them over through tough times’ represent those hardest hit by the closure.

The credit union closed its doors at lunchtime on Wednesday and a liquidator was appointed following High Court orders issued on behalf of the Central Bank.

The closure affects more than 50 per cent of the 6,000 strong population of the Beara Peninsula, 3,500 of whom were BCU members.

“Both business wise and personally, this has a devastating effect,” Noreen Hanley, the local florist, said.

A member for the past 15 years, she used BCU for business banking, personal loans and a car loan.

“Bank charges are 50 per cent higher than the credit union, that’s why I used it. It’s scary. If I needed something extra to buy stock you would always get a small loan from the credit union that you would not get from the bank,” she said.

“A solution is on the cards,” Finbarr Harrington, chairman of Cork County Voluntary Forum, said.

“What’s gone on is complicated and it’s in the hands of the authorities. The members had no control over what happened. Today is about finding a solution,” he said.

Locals expressed dismay over the loss, BCU is the first credit union to close in the country. Two separate consultants’ reports, in 2010 and 2014, had shown up irregular practices concerning loans to officers of BCU, according to a report prepared for the High Court.

BCU opened in 1978 and served as a much valued service to the local community.

“We can’t stress the importance of this facility enough. People rely on it for small loans to get through the tough times, especially during the winter,” Ms Goulding, who runs a B&B in Eyeries, said.