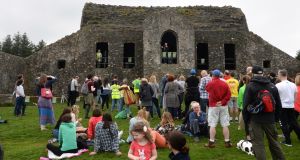 Save the Hellfire group protesting against the development by South Dublin County Council and Coillte, at the Hellfire club in Dublin in 2017. Photograph: Dara Mac Dónaill / The Irish Times

Local groups who opposed the development of a €15 million visitor centre at Dublin’s Hell Fire club have described An Bord Pleanála’s approval of the project as “deeply disappointing”.

An Bord Pleanála confirmed last week it had granted planning permission to South Dublin County Council to develop a visitor centre in the Dublin mountains at the Massy’s Wood estate and Montpelier Hill which includes the Hell Fire club, a protected structure and national monument built around 1725.

The council welcomed An Bord Pleanála’s decision and said that the project team had taken into account “key local issues raised” and incorporated them into the design plans.

The project, which is being developed in co-operation with Coillte and the Dublin Mountains Partnership, will ensure the “preservation of the landscape, ecology and heritage features of the unique and natural environment of the Dublin Mountains in a manner that is socially and environmentally sustainable”, according to a statement from the council.

Members of the Save the Hellfire Facebook group posted on Monday that they were “deeply disappointed and shocked” by the decision to push ahead with the project.

The group accused An Bord Pleanála of supporting a “vanity project”and said it would study the details of the decision. It also urged its members to voice their objections to local TDs.

Elizabeth Davidson, a member of the Save the Hellfire group, described the proposal as “preposterous” and said people were shocked the entire project had been given the green light.

“Never in our wildest dreams did we think they might have given permission for the whole thing because it’s so bizarre,” Ms Davidson told The Irish Times. “The inspector had recommended that various aspects be eliminated. That’s why people are so annoyed.”

Ms Davidson said the local community felt as if the 170 submissions made against the development had been “completely ignored”. If the centre is built, it will result in huge traffic jams in the area and damage to the local biodiversity, she added.

The next step is not just a “simple appeal but a judicial review,” she said. “We have people looking at it to see if we have grounds for a review but we have to be guided by advice on it. It’s not something we’d take on lightly.”

Independent local councillor Alan Edge posted on Facebook that he remained “implacably opposed” to the development and that “you don’t need a €22 million building in order to enjoy a wood”.

However, mayor of South Dublin County councillor Ed O’Brien said the decision to develop the site had been “measured and sets out conditions to ensure that any reservations the community has about the development are dealt with”.