Will Micheál Martin ever get to sit in Leo’s seat? A political reshuffle of interest only to them 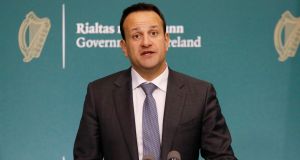 ‘I ask people to bear in mind that this is a virus that did not exist three or four months ago. It did not have a name two months ago.’

Two weeks on from their alarming surge of Covid-19 related sanctimony and self-importance, a much subdued cohort of confirmed Government cases returned to the Dáil chamber on Thursday afternoon with their coughs considerably softened.

The chilling outbreak saw Government Ministers and backbenchers losing the run of themselves entirely during a special session to discuss the coronavirus crisis, refusing to engage and throwing hissy fits at the Opposition for daring to drag their exalted personages into parliament at time of national emergency so they might be asked some important and legitimate questions.

The only reminder of that dark day was Josepha Madigan’s defiant bottle of hand sanitiser plonked on the ledge in front of her and a brief reference from People Before Pandemic’s Richard Boyd-Barrett who valiantly refrained from crowing.

“I welcome the fact that the Government has accepted the need to answer questions notwithstanding some, I thought, fairly disingenuous condemnations of those of us who thought it was important that this Dáil would sit and that Ministers would be subject to questioning the last time we were here.”

This time, the Taoiseach led an impressive about turn from his side. Clearly the hugely negative reaction to the display of slightly sinister silliness – from genuinely motivated opposition politicians, media and general public – prompted a very different approach to the second special sitting to discuss the Covid-19 crisis.

Messengers of the People

There wasn’t a whiff of the superior and antagonistic tone which so astonished Opposition TDs the last time. From the beginning of Leo Varadkar’s conciliatory and inclusive opener, it was clear there would be no Government voice telling fellow Messengers of the People that they ought to be ashamed of themselves for doing the job they were elected to do.

“I welcome the opportunity to hear from all sides of the House today,” said Leo. “Don’t be afraid to ask the hard questions. If we can answer them we will. If we cannot we will say so but do please understand that in an evolving situation it isn’t always possible to answer all questions in real time. You simply just don’t have all the information and there is so much going on.”

This was greeted with a very restrained level of eye rolling from the few deputies across the floor dispersed around the benches at socially acceptable distances.

“And do, please , share your ideas as to how we can respond better to this emergency. No party has a monopoly on wisdom and we will need good ideas and good input from all parts of the House.”

He also needs good input, wisdom and ideas from at least one part of the House if a new government is to be assembled from two of the three biggest parties (Sinn Féin having been told to self-isolate by the other pair) and a new component drawn from a assortment of highly suspicious smaller parties.

But this complicated project wasn’t mentioned much during a debate focused solely on the state of our pandemic republic and how best the authorities can deal with it now and into the future.

The Fianna Fáil leader, peppering to be Rotisserie Taoiseach if and whenever the Grand Amalgam is achieved, made a very sensible and measured contribution. For the sake of destiny, if not yet posterity.

Will Micheál Martin ever get to sit in Leo’s seat? The first part of that prized journey across the floor is in place – Fianna Fáil and Fine Gael have agreed to govern together for the first time ever, a monumental reordering of the political landscape which they have disappointingly discovered is only of interest to themselves and irredeemable political anoraks.

They need to find a willing victim now. Or perhaps an unselfish, public-spirited partner willing to put themselves out there for the sake of providing a stable government at a very perilous juncture for the country and its people.

It’s a tough one.

The main issue raised during the debate was the grim scenario in many care homes around the country, where the rate of deaths is spiralling and the staff and equipment situation is in a bad way.

Sinn Féin’s Pearse Doherty was strong on the issue, standing in for his leader Mary Lou McDonald who has been laid low by the virus. There were good wishes for her speedy return to Dáil hostilities from all sides. There were also good wishes, for a happier reason, extended to Alan Kelly, the new Labour Party leader on his first outing since his elevation.

The Taoiseach made copious notes as the questions came thick and fast. He covered one side of a folded up sheet of paper with a closely written, spider-like scrawl (once a doctor, always a doctor) and filled another, and another.

He found it hard to keep up with the questions, asked without trace of hostility or political game playing by opposition members. With strict time limits on the length of contributions, the Taoiseach sighed it was quicker to ask a question than answer one “but I want to answer as many as I can”.

When the opening statements concluded, the Ceann Comhairle called for questions. More? The Taoiseach waved his crowded pages in the air. “But . . . but . . . I’ve jotted down one, two, three, four . . . ” Plenty to be getting on with before the next batch.

There were replies aplenty from the Taoiseach and then his Minister for Health, Simon Harris, on the problems in nursing homes and the reported crisis in some quarters over the lack of equipment.

Mattie McGrath clouded the issue briefly with a slip of the tongue which he quickly corrected when calling for more “PE” equipment for nursing homes.

Eamon Ryan of the Greens (seen as the man most likely to provide the third leg to the governmental stool even though the Green Party sounds a very long way from any class of a decision) made a wide-ranging contribution, ending with a call for better pay and conditions for care workers and front-line workers in all areas.

He too spoke about worries over testing, as did Róisín Shortall of the Social Democrats who spoke about big pharma companies withholding a chemical agent needed for the testing equipment.

The Taoiseach had a long, detailed answer concerning two companies she specifically mentioned. “I am learning a lot about the matter, as many people are, and one thing I have learned is that different machines use different reagents,” he began, launching into a dissertation of the different type of machines on the market and how they use different forms of the chemical.

Things are changing from day to day. One crisis is overtaken by another and another, he said.

“So it’s never ever as simple as sometimes represented in commentary.”

But still, the word from care workers about equipment and conditions – as related many times on Thursday in the Dáil, did not tally with what the Taoiseach was saying back to the TDs.

“I ask people to bear in mind that this is a virus that did not exist three or four months ago. It did not have a name two months ago.”

There was praise and understanding for the Taoiseach and the Health Minister alongside the hard questions.

They weren’t all satisfactorily answered, but Varadkar and Harris went a good way towards providing transparency and showed a willingness to continue doing it.

A very necessary sitting. It’s a pity they had to fight for it to happen.

But a good day’s work for all concerned in the Dáil.

1 Travellers call on comedian Des Bishop to apologise for ‘absolutely appalling’ comments
2 A further three deaths and 1,167 new Covid-19 cases reported in the Republic
3 One hundred Irish retailers for all your online Christmas shopping
4 Martin only told of contact tracing problem when texted Irish Times story
5 Covid-19 restrictions in Europe: how does Ireland compare?
Real news has value SUBSCRIBE