In the South Circular Road mosque, people are polite but weary with media questions 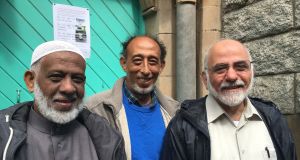 In Dublin Mosque on the South Circular Road in Dublin, Fazel Ryklief sits at his desk, which is strewn with papers, phones, pens and paperclips, in a small office filled with cabinets and chairs.

The walls are covered with large poster photographs of Mecca during the Hajj, the annual pilgrimage undertaken by all Muslims, hopefully, once in their lives to Islam’s holiest shrine.

Speaking without anger in the wake of the London terrorist attack, Ryklief says: “There comes a stage when every one of us here becomes so fed up of apologising for something that we had nothing to do with.”

The CCTV screen displays images from the 15 cameras that monitor the streets outside the mosque, a signal that this is a community that needs to reassure itself that all is well.

The mosque had a steady stream of reporters yesterday, all prompted by the disclosure that one of the London Bridge killers, Rachid Redouane, lived for a time nearby in Rathmines.

Ryklief and the mosque’s administrator, Mudafai Al Tawash, along with the Imam, Yahya Al Hussein, extended hospitality to all, helping with grace, patience but also a certain weariness.

“So I don’t know, maybe he just came [to Dublin] to get married and went back to England. Nobody knows him,” says Ryklief, who was born in South Africa and lives in Dublin with his Irish wife of some 30 years.

Imam Al Hussein, who was born in Sudan and has also lived in Ireland for decades, was as unknowing as the rest when Redouane’s face appeared on the television news.

“Nobody preaches radicalisation here,” says Al Tawash, who was born in Iraq but has lived in Ireland for some 40 years , “We try to do a lot of integration.”

Radical propaganda websites, including some apparently Irish-based ones, rail against western values, democracy among them. At the Dublin mosque, however, they embrace collectivism.

The mosque community (150-plus regular worshippers but up to 700 on Fridays) elect – men and women – a council, the Majlis Shura, comprising five men and two women, on which the imam also sits.

“I am subject to the council and to the members,” he says.

All three men spoke of their efforts to shield and guide their young people away from extremism but also of the difficulty of preventing access to toxic propaganda online.

“But through the internet, through the social media, you don’t know what’s in the minds, especially of the youth, the younger generation. It’s really very difficult to know,” says Al Tawash

“In Islam, it is very clear, if you kill innocent people – in any religion I think, not only in Islam – if you kill someone that is innocent you will get a high punishment by God,” he says.

The mosque works hard to build local links, including good relations with the Garda Síochána. Every three or four weeks, a garda holds a clinic at the mosque to offer help and to listen.

Events such as the atrocities in London and Manchester always heighten fears: “You get to a stage of being so angry, and when something happens, you say ‘Please God, don’t let it be someone who’s a Muslim’,” says Ryklief.

“You just feel this is building up to something that is going to happen one day and, unfortunately, this association with Islam, if people stopped mentioning the word ‘Islam’, people might think differently about what’s happening.”