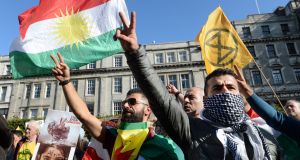 Kurdish people in Dublin have appealed for Minister for Foreign Affairs Simon Coveney to recognise the “extinction” their people face as a result of the Turkish invasion in northeastern Syria.

At a rally in Dublin’s O’Connell Street, Ala Omer said children were being killed on a systematic basis by the poisoning of bread and drinking water. She said women were being taken away and many Kurds killed.

The Kurds are members of a large, predominantly Muslim, ethnic group with the population spread among Turkey, Iraq, Syria and Iran.

Kurdish fighters in Syria, who are mainly Muslim, aligned themselves with the US military to defeat Isis in recent years. But Ms Omer says since the US refused to protect Kurds from the expected Turkish invasion, security is breaking down around prisons containing up to 15,000 Isis supporters. She said the chances are that Isis fighters will escape.

Ms Omer, who has been in Ireland one year, said the community here had been learning of atrocities committed against the Kurdish people by Turkey through friend and family networks over recent days.

She said the killings were not confined to clashes between Kurdish military and the invading Turks, but that civilians, and particularly civilian children, were being deliberately targeted.

Ms Omer said the Irish people could use their influence in the EU to support Swedish plans for a weapons embargo against Turkey at an EU foreign ministers meeting on Monday. “This would be effective,” she said. She also said videos of what was happening in Syria were available online for anyone who wanted to know what was happening.

Azad Izzeddin, who is an Irish citizen and has lived here for six years, said “three million people are being ethnically cleansed” from the autonomous region of northeastern Syria, also known as Rojava.

Ali Hassan said it was the Kurdish community’s hope that Mr Coveney would rally EU leaders' support for the proposal, because "we know that Ireland’s voice on human rights is respected around the world”.

The rally was also addressed by Sinn Féin TD Seán Crowe and Rise TD Paul Murphy, who called for solidarity with the Kurds.

An unsigned statement handed out at the rally stressed the security threat to prisons containing Isis fighters and described the “unprovoked military assault” as “a flagrant violation of international law and human rights conventions”.

It called for the international community to formally condemn Turkey and call for an immediate end to all military action and the creation of a safe haven and a no-fly zone.