John Downey extradited to North after arrest in Republic on Friday 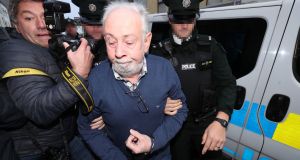 A man has been remanded in custody charged with the murder of two soldiers in Northern Ireland in 1972 .

John Downey (67), who was wanted over the murders of two Ulster Defence Regiment soldiers, appeared in Omagh Magistrates Court on Saturday morning, where was refused bail due to the judge’s assessment that he may be a flight risk.

He was extradited to the North after being arrested in the Republic. He handed himself in on Friday after he lost an appeal to challenge the extradition in July this year.

Lance Corporal Alfred Johnston — a father of four — and Private James Eames — a father of three — died when a device exploded in a car they were checking on the Irvinestown Road, Cherrymount, Enniskillen, in 1972.

Gardaí released a statement on Friday evening, which said: “An Garda Siochána arrested a male in his sixties earlier today, October 11th, 2019.

“This male has been extradited to Northern Ireland in accordance with an EAW (European Arrest Warrant) issued by the PSNI.”

The Police Service of Northern Ireland (PSNI) said it had arrested a 67-year-old following his extradition.

Mr Downey arrived for his hearing on Saturday morning at Omagh Magistrates’ Court, where a large crowd had gathered outside, among it Sinn Féin MPs, MLAs and councillors.

A police officer told the court: “Police object to bail for the defendant on the grounds that he is a flight risk.

“The defendant was arrested on foot on a European Arrest Warrant on November 5th, 2018, and released on High Court bail on November 8th, 2018.

“The defendant did not consent to be extradited and appealed to the High Court in Dublin.

“On March 6th, 2019, the High Court granted leave to appeal extradition, this appeal was heard on May 27th, 2019 and was dismissed on July 3rd, 2019. Then on July 11th, the defendant sought leave to appeal to the Supreme Court, who on October 9th directed extradition.

“In light of all of this, police are of the view the defendant doesn’t want to face trial in Northern Ireland.”

Mr Downey was arrested at his home in Creeslough, Donegal in October last year under a European Arrest Warrant after authorities in Northern Ireland determined they had sufficient evidence to charge him with the murders of Mr Johnston (32) and Mr Eames (33). - PA