Kasparov warns of endgame in Ukraine

Former World Chess Champion, writer, and political activist Garry Kasparov is in Ireland to promote his candidacy for President of the World Chess Federation. 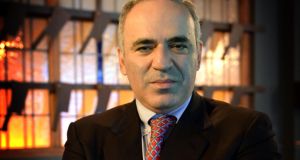 
“I’ve been warning for many years that one day Vladimir Putin would show his colours,” says Garry Kasparov, who was, until his retirement in 2005, the best chess player in the world. “For me [the Crimean invasion] was not a surprise. Unfortunately it was a surprise for the leaders of the free world . . . I knew that eventually our problems would become your problems.”

Kasparov is here as part of a campaign to win the presidency of FIDE, the World Chess Federation, but as a long-time critic of Vladimir Putin he’s also eager to talk politics. He has a busy schedule, including a Late Late Show appearance and an itinerary glad-handling chess buffs.

Before we meet he was due to meet a room full of eager child chess fans at the Mansion House, but due to travelling glitches he missed the appointment (Eamon Gilmore played chess with a young prodigy instead). Now he’s sitting in the Clarence Hotel waiting for his lunch. Kasparov was vocal in his support for jailed Putin critic and oligarch Mikhail Khodorkovsky. He protested publicly, was arrested and in 2008 announced an abortive attempt to run for the Russian presidency.


Compensation
The European Court of Human Rights ordered the Russian government to pay compensation for his arrest in 2007, though the Russians have since appealed. “2007 was a vegetarian time compared to what’s happening now,” he says grimly. “Now you go to jail and nobody is going to pay any attention to the European Court of Human Rights or any complaints from inside or outside.”

Kasparov and his family live in New York and he was granted Croatian citizenship this year. “I left Russia 13 months ago and going back to Russia today would be a one-way trip. I don’t think it would be wise.”

He doesn’t believe the West had been taking the situation in Russia seriously enough prior to the Ukrainian situation, although he was pleased by the international response to the Pussy Riot trial, at which he was arrested while protesting. “Putin’s regime politicised it and demonstrated to the free world that their regime couldn’t accept any dissenting voices.”

He believes Russia will eventually cross the Ukrainian border if there’s no significant response. “That’s what happened with Hitler, who was in 1936 not as dangerous as in 1937.”

He refers to the Crimean annexation as the Crimean Anschluss. “If the signature of the US president or British prime minister is no longer an ultimate red line, then the whole concept of a European Union or having treaties doesn’t make any sense.”

He’s always had strong rivals – Anatoly Karpov, the IBM computer Deep Blue (which famously beat him at chess in 1997), FIDE, Putin. I list them and he seems to become taller in his chair. “The stronger the opponent the better the chance to prove yourself,” he says.

Is geopolitics a chess game? “I always said my chess knowledge was not of much help in Russia because in chess you have fixed rules and unpredictable results and in Putin’s Russia it’s exactly the opposite.”