Just 145 days to go: A Christmas store is already open

Selfridges opens its seasonal shop in response to ‘overseas’ demand 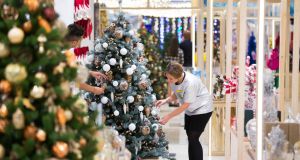 An employee arranges a display on a Christmas tree during the opening day of the Christmas shop in the Selfridges, London, Monday. Photograph: Jason Alden/Bloomberg

Oh Mr Selfridge! What were you thinking? There are still 145 shopping days until Christmas and already you have opened a festive shop and festooned it with fake snow and a red faced Santa in order to better flog baubles, tinsel and decorative lights to shell-shocked shoppers.

In what can only be a deeply misguided attempt to make Wizzard’s wish come true by making it Christmas every day, Selfridges on London’s Oxford opened its seasonal shop on August 1st.

It has staked its claim to be the first department store in the world to open such a shop in 2016. And it has tried to make it sound like this was a good thing.

Almost all of the department store’s fourth floor has been turned into a winter wonderland complete with Santa Claus, snow and 50,000 Christmas decorations.

Selfridges, which has been planning for next Christmas since last Christmas, defended its absurd move in the face of understandable criticism for pretty much every quarter and insisted it was merely responding to consumer demand, particularly demand from overseas customers.

“We have so many customers visiting from all over the world and eager to snap up festive souvenirs on their summer holidays, which they can’t buy at home. So, we have to make sure we’re ready to showcase Christmas decorations they will truly treasure.”

In three weeks or so Brown Thomas on Dublin’s Grafton St is likely to follow suit.

In case you’re interested (and you really shouldn’t be, at least not yet) this year’s big trends are likely to be personalised decorations, disco gems, warm and white metallics, and Nordic wood.