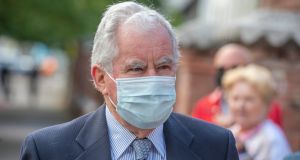 A landlord has been given a week by a judge to halt students from holding Covid-19 lockdown parties at two of his properties near University College Cork.

Mr O’Reilly, of Birchley, Model Farm Road, Carrigrohane, was told by Judge Olann Kelleher at Cork District Court to sort out the issue by next Friday or he would make an order under environmental legislation which would leave him open to a fine or jail if he failed to comply.

“It’s up to you to make all the running on this,” said Judge Kelleher as he found in favour of the two women, members of the Magazine Road and Surrounding Areas Residents Association.

“I am accepting the evidence of the witnesses about the terrible time they have had. It is very sad to hear people, some who are moving on in years, cannot sleep at night in their own homes,” said Judge Kelleher.

“Mr O’Reilly says it is not his problem, that it is the students. He has turned a blind eye. He hasn’t much interest in the residents of the area as far as I can see. He seems to answer all questions in a similar way, namely that the students have rights. But people living in the area have rights too.”

The judge said Mr O’Reilly blamed UCC and local pubs, but he was the beneficiary of students renting his properties during the summer months. He said Mr O’Reilly seemed content to continue collecting rent from them until their leases end on August 31st, without making any moves to eject them.

They alleged Mr O’Reilly was “the person responsible for the following noise, namely loud music, persistent shouting and rowdy and aggressive behaviour during the day, into the night and the early hours of the morning” at 11 Highfield Avenue, College Road and 4 Dunedin, Connaught Avenue.

Both women testified about the disturbance that the parties had caused them over the past few months, with Ms O’Mahony describing students partying in the house directly across from her home until after 5am.

She said gardaí were called on several occasions but after they left, the students would continue partying.

She agreed that over 40 of the 50 houses on Highfield Avenue were rented but most landlords would do something if contacted about any issues. However, any time she or her daughter contacted Mr O’Reilly asking him to curtail the late night parties, they got no satisfaction.

Ms O’Callaghan similarly said she got no satisfaction from Mr O’Reilly anytime she ever complained and alleged that on one occasion he suggested he could let the house to some Nigerians staying in another of his properties on Cork’s Northside if she wished.

Mr O’Reilly denied ever making any comment about renting his Dunedin property, one of five he owns around UCC, to Nigerians. He said that used to get on well with Ms O’Callaghan and her husband after they invited him in for sherry when they first met but she was misinformed on this claim.

Mr O’Reilly’s solicitor, Eamon Murray submitted that because of the unusual circumstances of the pandemic, many young people found themselves with no jobs and no J1 visas for the United States and ended up attending these houses. However, he argued it was not as if the two houses were “Sodom and Gomorrah.”

Solicitor David McCoy, for the residents , put it to Mr O’Reilly in cross-examination that “You let them (tenants) off to do what they like as long as you are getting your rent, isn’t that it?”

Mr O’Reilly denied this, saying it was in his “interests to run a good ship”. He said the tenants could refuse to leave if he asked them and evicting someone was easier said than done. “It took me 14 months to get a drug addict out of a house,” he said.

Judge Kelleher said he could not direct the landlord to serve notices to quit on the students but he said this was a matter which Mr O’Reilly could consider with his solicitor. He adjourned the case until July 17th.