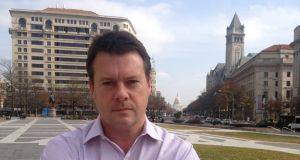 Speaking in Washington, British journalist Toby Harnden has said suspicions of collusion had been “completely dormant” until he “laid it all out there” using Garda and RUC sources and British army and RUC documents.

The British journalist whose 1999 book led to the establishment of the Smithwick Tribunal said that he feels “absolutely” vindicated by the tribunal’s findings that someone in Dundalk Garda station colluded with the IRA in the killing of two RUC officers in 1989.

Toby Harnden, now Washington bureau chief for The Sunday Times, said there was “a 10-year conspiracy of silence” as rumours of Garda collusion had been quashed “so emphatically” in the immediate aftermath of the killings of RUC Chief Supt Harry Breen and Supt Bob Buchanan.

Harnden claimed in the book, Bandit Country: The IRA and South Armagh, that a leak from the Garda station in Dundalk led to the killings of the two RUC officers in an IRA ambush near Jonesborough, south Armagh as they returned from a meeting at the station.

He wrote the book while working as Ireland Correspondent for The Daily Telegraph between 1996 and 1999, at which stage he was posted to the United States.

Speaking in Washington, Harnden said suspicions of collusion had been “completely dormant” until he “laid it all out there” using Garda and RUC sources and British army and RUC documents.

An eight-year inquiry, which cost €15 million and heard evidence from almost 200 witnesses, confirmed “some pretty compelling allegations of collusion” set out from his own journalistic resources, he said.

“There are many books that might not stand up to that kind of scrutiny, and Bandit Country did,” he said.

“The Smithwick Tribunal and its conclusions wouldn’t have happened if it hadn’t been for Bandit Country. It is the only time in my career that my work has had that national and international impact.”

Smithwick said in the report that he was “extremely disappointed” that Harnden chose not to testify publicly. The journalist defended his decision. He said he met Smithwick privately in London and Washington.

“I was confident that me appearing would not have added anything substantive to the tribunal,” he said.

“There was some quite serious issues of protecting confidential sources and I just ultimately felt that the book should speak for itself.”

Harnden said he was “surprised by the level of surprise and outrage” that members of the Garda Síochána might have colluded with the IRA, given how the paramilitary group drew its support.

“I find it completely unsurprising that individuals in an Irish police force during the Troubles would have had republican sympathies towards the IRA and would have helped them out. I would have been surprised if that wasn’t the case,” he said.

Harnden admitted to being “obsessed” with the killings of Breen and Buchanan while he carried out research for the book, in which he looked back at 25 years of murders in the south Armagh and north Louth areas.

The timing of the RUC men’s meetings in Dundalk and the killings, and his understanding of how the IRA operated, led him to suspect that an IRA mole in the Garda, rather than an elaborate surveillance operation, was behind the killings. Interviews with other sources confirmed his suspicions, he said.

Harnden has visited Northern Ireland since he stopped working there in 1999 but he has not returned to south Armagh. He has said to himself that he would never go back, partly for security reasons. “It probably wouldn’t be a good place for me to hang out.”

Revenue dogs find €69,000 of drugs labelled as board games, kitchen supplies, clothing 22:05
More than 50 people to be allowed in large churches under new guidelines 21:42
Weather warning issued for parts of the country for this weekend 21:40
Man’s sex assault conviction quashed as trial juror was related to victim in separate case 20:45
Transgender Cork farmer (65) surprised at positive response to telling her story 20:39

1 Transgender Cork farmer (65) surprised at positive response to telling her story
2 Bobby Storey: The IRA's planner and enforcer who stayed in the shadows
3 Unflappable ‘Dr Tony’ became public face of Covid-19 crisis response
4 Q&A: How close are we to having a Covid-19 vaccine?
5 Is Donald Trump losing his touch?
Real news has value SUBSCRIBE