John Hume has died in his home city of Derry. Harry McGee reports on the life of Ireland’s chief architect in the peace process and a man described by Bill Clinton as ‘the Irish conflict’s Martin Luther King’. 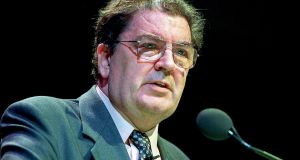 John Hume was the inspiration behind the Sunningdale Agreement, the Anglo-Irish Agreement and the Belfast Agreement.

John Hume was a towering political figure who helped to redefine Irish nationalism. In the process, he changed Irish politics, North and South, as well as transforming the relationship between the islands of Ireland and Britain.

The current powersharing structure within Northern Ireland, and the institutional structures that define the relationship between the North and the Republic, as well as those between Ireland and the United Kingdom owe more to Hume than anybody else.

1 Coronavirus: NPHET letter to Government warns of ‘extremely critical juncture’ for Dublin
2 Life in Level 3: What will happen under new restrictions in Dublin?
3 Dublin lockdown: Cabinet to meet in person as capital prepares for new restrictions
4 Coronavirus: Indoor dining, weddings, funerals, travel to be hit as Dublin set for Level 3
5 Stephen Donnelly dodges the questions as Matt Cooper mercilessly pursues the answers
6 Cluster among golfing group in Midlands a 'significant Covid-19 incident'
7 Fiona Bruce in a Spitfire is a Brexiteer’s fever dream
8 Aldi empire wracked by family feud
9 Michael McDowell tells Seanad he has ‘no confidence’ in NPHET
10 Coronavirus: WHO warns of ‘alarming’ spread across Europe
11 ‘We poured our hearts and souls into it’: Last orders as landmark pubs and restaurants sell up
12 Diarmaid Ferriter: Those in Downing Street have no regard for the North or the DUP
13 TikTok to be banned from US app stores from Sunday
14 What is the going rate for a home in Co Donegal?
15 Cliff Taylor: What permanently low interest rates mean for you as a saver or borrower
16 East to get warmer as Ireland's climate to change dramatically by 2050
17 Eat outdoors while you can as sunny weekend set to give way to colder week
18 NatWest considers closing Ulster Bank in the Republic
19 Will PTSB be Ulster Bank’s knight in shining armour?
20 Ulster Bank CEO tells staff ‘all options’ on future on the table
21 Living with Covid plan: What is in each of the five levels?
22 Leo Cullen says ‘fresh energy’ behind big Leinster selection calls
23 Coronavirus: NPHET recommends ban on indoor dining in Dublin
24 Coronavirus is out there, seeding widely, and things will get worse
25 Van Morrison’s anti-lockdown songs: ‘No more taking of our freedom, And our God given rights’
26 Netflix’s Nurse Ratched is a pale imitation of One Flew Over the Cuckoo’s Nest character
27 English ‘chumocracy’: Boozy weekends and class disdain with the Camerons
28 Champions Cup: Leinster v Saracens - Leinster player profiles
29 How Ireland managed to green the White House
30 Public health doctors threaten strike action over pay row
31 Remembering Jimi Hendrix 50 years on: the guitar god and the Irish connection
32 Champions Cup: Leinster v Saracens - Saracens player profiles
33 Culture Night 2020: From a Liffey tour to Cork slang lessons, 30 events not to miss
34 HSE turns down request from Britain to process tests in Irish laboratories
35 Dublin-based Fenergo considers $1.5bn listing
36 Jury continues considering verdict in Dundrum murder trial
37 First Chinese-born barrister called to the Bar of Ireland
38 Dermot Desmond: Covid could force Premier League rethink on Celtic and Rangers
39 Volkswagen close to selling its Bugatti supercar brand
40 The Movie Quiz: Marilyn Monroe and a title she did without
Real news has value SUBSCRIBE