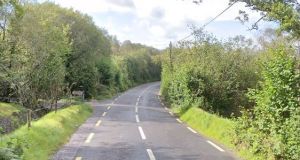 The double-fatality occurred on the road between Kenmare and Glengarriff. Photograph: Google Maps

Gardaí have appealed for witnesses following a single vehicle crash which claimed the lives of two men in West Cork on Monday.

The crash also left a teenager critically injured when a car went into a river near Glengarriff early on Monday morning.

Supt Declan O’Sullivan of Bantry Garda station said gardaí were anxious to speak to anyone who may have seen the VW Jetta which crashed on the Kenmare Road in Glengariff at around 5.30am this morning.

The driver of the car, Tadhg Murphy (19) from Bocarna, Glengarriff and a rear seat passenger, Michael Bowen (40) from Akakista, Durrus were both killed when the car crashed off the Kenmare Road and dropped down in the Glengarriff river, about a kilometre from Glengarriff.

The car dropped down about 20 feet from the road before coming to rest on its roof in about three feet of water and both deceased were pronounced dead at the scene after they were recovered from the vehicle by members of Bantry and Castletownbere Units of Cork County Fire Service.

The 17-year-old, who is also from Glengarriff, was rushed by ambulance to Cork University Hospital where he underwent emergency surgery and he remained in a critical condition on Monday evening while the 22 year old was also treated for minor non-life threatening injuries.

It’s the second tragedy to befall the Bowen family as Michael Bowen’s father, John was killed in a road traffic collision when he was hit by a 4 X 4 while walking home along the Kilcrohane Road in Durrus just before 2am on January 30th 2016.

Local independent Cork South West TD Michael Collins from Lowertown near Schull said the tragedy had cast a pall of gloom around the greater Bantry area and people’s thoughts and prayers were with the two young men who were injured in the collision.

“Michael Bowen was doing a bit of stone masonry work in recent times – he was a good old character and well liked – it’s very sad for him and his family, particularly given the tragedy they suffered a few years ago when his father was killed in a traffic accident in Durrus.

“It’s frightful, the whole thing is shocking – for this tragedy to hit the greater Bantry area on a Bank Holiday weekend, or indeed at any time for that matter, is a cause of great upset and sadness, it’s hard to comprehend the tragedy at this time, the whole place is numb, absolutely numb.”

Gardaí closed off the road for several hours to allow a Forensic Collision Investigator examine the scene of the crash while a garda PSV inspector is expected to examine the VW Jetta once it is retrieved from the river to establish if there was any mechanical fault with the car prior to the crash.

Gardaí are hoping that post-mortems at Cork University Hospital on Tuesday will establish the exact cause of death of Mr Murphy and Mr Bowen.

The crash happened about 100 metres from the entrance to the Glengarriff Wood Nature Reserve on the Kenmare Road and among the lines of inquiries being pursued by gardaí is whether the four friends may have spent some time in the woods just prior to the collision.

Gardaí have asked anyone who can assist them in their investigation to contact Bantry Garda Station on 027 20860 and they are anxious that anyone who may have camera footage, including dash-cam and was in the area at the time to make this footage available.