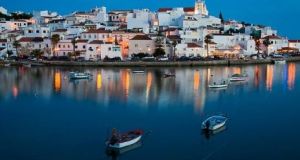 Ferragudo, Algarve: Officers from the Guarda Nacional Republicana have been emptying restaurants and clubs in the resort. File photograph: Getty

Police in the Algarve in Portugal have been dispersing large groups of Irish and British holidaymakers who are breaking the country’s Covid-19 restrictions.

Officers from the GNR (Guarda Nacional Republicana) have been emptying restaurants and clubs in the resort.

In a news report on Portuguese television, one unnamed teenage Irish holidaymaker said he and his friends came to the Algarve every year. When asked how many of his friends were there, he responded: “Like maybe 50”.

Under Portuguese law, gatherings are limited to 20 people and there is a prohibition of alcohol consumption on public roads. Strict closing times are observed too.

Local bar owner Martin Kerr said alcohol was having a disinhibiting impact on many young tourists in the resort.

“With the current restrictions, we have to respect the laws and, after a few drinks, some of them forget,” he told RTP, Portuguese state television.

Portugal has had 51,463 infections to date and 1,738 deaths. Its infection rate is roughly the same as the Republic’s but has less deaths though it has twice the population.

However, it is seeing a surge in cases in recent weeks with an average of more than 200 new infections per day at present.

As a result of the continued presence of Covid-19 in the country, Portugal was left off the green list of 15 countries deemed by the Government to be safe for travel.

Irish tourists to Portugal are expected to quarantine for two weeks on their return from the country.