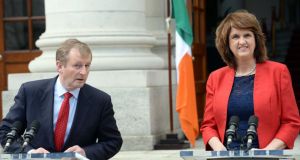 Tánaiste Joan Burton has said she hopes the report of the Fennelly commission on events leading to the departure of Martin Callinan as Garda commissioner will be made available as soon as possible. She said she understands the Taoiseach is of the same view. Photograph: Eric Luke / The Irish Times. 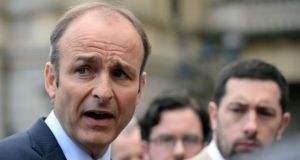 Fianna Fáil leader Micháel Martin has accused the Taoiseach of “hiding” from questions about the Fennelly commission, set up to investigate events leading to the departure of Martin Callinan as Garda commissioner last year.

Tánaiste Joan Burton has said she hopes the report of the Fennelly commission on events leading to the departure of Martin Callinan as Garda commissioner will be made available as soon as possible.

“That, I think, is the view of the Taoiseach as well,’’ she added.

Taoiseach Enda Kenny, Attorney General Máire Whelan and secretary general to the Government Martin Fraser are reported to have been called back by Mr Justice Fennelly’s commission which is investigating the circumstances behind Mr Callanan’s resignation.

She said some of the comments made by Fianna Fáil leader Micheal Martin on the issue “were designed to politicise it’’.

Ms Burton was speaking to journalists in Dublin on Monday, after officially opening a conference of the Ballymun pilot youth guarantee.

Mr Martin earlier accused the Taoiseach of “hiding” from questions about the Fennelly commission.

During his St Patrick’s Day visit to the United States last week, Mr Kenny said it was “an offence for anybody associated with the commission to comment on it and I do not propose to breach the law”.

Speaking on RTÉ radio on Monday morning, Mr Martin said it was “extraordinary” that Mr Kenny would say it was illegal for him to confirm whether or not he gave evidence a second time or not.

“And I would point out that as far back as June of last year, responding to a stinging attack by Minister Alex White at the time – Alex White was extremely critical of the Taoiseach’s role in the handling of the resignation of the former garda commissioner - the Taoiseach’s response to that was that he had been contacted by the commission of inquiry and that he intended... to respond within the next two weeks and give evidence. So while it’s now an offence for the Taoiseach it wasn’t an offence for the Taoiseach in June of last year,” he said.

Mr Martin said Mr Kenny should have been “up front and honest” and dealt with the matter on the floor of the House.

“It’s extraordinary that 12 months on from a very grave matter - the resignation of the former commissioner in very controversial circumstances - and no one is any the wiser as to what happened? That is not satisfactory,” he said.

Asked whether this was “another attempt” by Mr Martin to interfere with and politicise the investigation and that it called his judgement into question, Mr Martin said the judgement of Alex White should be called into question in that case “who was far stronger in his remarks last June”.

“The Taoiseach has a responsibility in this matter. And to tell us very simply what happened and the circumstances around it. It is unacceptable given all the rhetoric we’ve heard from the Taoiseach and the Government about telling it how it is and transparency,” he said.