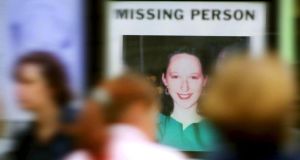 Josephine “Jo Jo” Dullard has been missing since 1995. In 1999, garda posters were put up seeking the public’s help in locating the Kilkenny woman. Photograph: Bryan O’Brien

The death has occurred of Mary Phelan, who spent more than 22 years of her life searching for her missing sister Jo Jo Dullard.

Mrs Phelan died at her home in Cuffesgrange, Co Kilkenny, after a short illness, and did not live to see closure or justice in the case of Jo Jo, who disappeared in 1995 at the age of 21.

Jo Jo Dullard was last seen in Moone in Co Kildare on the night of November 9th, 1995. She had been in Dublin but missed the last bus home to Callan and instead hitched a lift to Naas and another to Moone.

She rang a friend from a phonebox and said that a car had pulled up, but was never heard from again.

A major search was mounted for her in the days, weeks and months that followed, but no trace of her was ever found.

Her sister Mary Phelan said several times in recent years that the gardaí had information about a “chief suspect” in the case, but that it was not pursued.

Mrs Phelan campaigned vigorously for information during the intervening years, bringing her case to the Government and meeting people including Bertie Ahern, Hilary Clinton during a visit to America, and officers from the FBI who were expert in missing persons cases. She was instrumental in moves to establish Operation Trace, set up by Garda management in 1998 to investigate the disappearances of six young women in Leinster over a five-year period.

Family friend and local Fianna Fail TD John McGuinness, who helped Mrs Phelan with her campaign, described her on Friday as “an extraordinary woman” who was determined to do as much as she could  for Jo Jo.

The 67-year-old spent some time in St Luke’s Hospital in Kilkenny recently and was moved to Castlecomer District Hospital before asking to be brought home to die.

“She was a great character, but she never got closure,”  Mr  McGuinness said. “Up to the end, she wasn’t talking about her death or her illness, she was talking about Jo Jo Dullard. She was an amazing woman.”