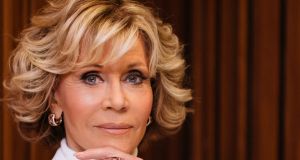 Jane Fonda: “We were sitting in the living room and a body was carried in, bleeding a lot. It was the Troubles.” Photograph: Caroline McCredie/Getty

Claims by Hollywood actor Jane Fonda that a bleeding body was carried into Martin McGuinness’s house while she was visiting in 1976 have been described as “utterly implausible” by veteran journalist Eamonn McCann.

Mr McCann, who lives near the McGuinness family in Derry’s Bogside, said the idea was “so implausible that I’d rule it out entirely”.

He said Fonda and her then husband, Tom Hayden, had visited members of what were then known as Provisional Sinn Féin in Dublin, including Northern members.

“I know that because I knew the people involved, and I remember cursing one of them for not having alerted me in advance to Jane Fonda,” he said.

“There were always people floating around in Dublin visiting this one and that one . . . even second hand, the whiff of cordite always appeals to some American and British celebrities, but the idea that a bleeding body was carried in Martin McGuinness’s house in my view is just nonsense.”

The Oscar-winning actress (82) described in an interview on Friday’s Late Late Show on RTÉ how she, her husband and son had spent the day with the former IRA leader and his family.

“We were looking for Gerry Adams and someone directed us to Martin McGuinness’s house and my son, Troy, was with us and he was about six years old,” Fonda said. “I was married to the late Tom Hayden, who was Irish, so we were sitting in the living room and a body was carried in, bleeding a lot.

“It was the Troubles and Tom put some of the blood on his fingers and he said to Troy, ‘Your forefathers, your forebears, your people.’”

The claim was also rejected by Mr McGuinness’s son, Fiachra, who said on social media that Fonda was “bringing a fiction movie to the Bogside” and posted a photograph on Twitter of her smiling beside his father.

“Jane Fonda telling a different story from the one that actually happened,” he wrote. “Here she is happy enough with my father at his home.”

Mr McGuinness – who went on to become a senior Sinn Féin politician and the North’s deputy first minister – died in 2017.

In a 2002 interview with The Irish Times, he described how he “came home from Mass one day and Jane Fonda was there”. He said he made her and her husband a meal.

“My wife [Bernadette] was amazed but I took those things in my stride . . . Bernadette was pregnant at the time and she sent baby clothes when [their daughter] Fionnuala was born.”