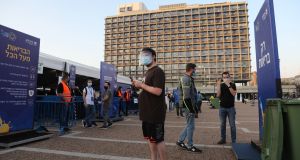 More than one million of Israel’s population of 9.3 million have now received the first of two doses of the Pfizer/BioNtech Covid-19 vaccine.

Politics has played a role in the country’s drive to get people inoculated against the disease, with prime minister Binyamin Netanyahu, who will soon face another general election, of the belief that a successful and rapid vaccination programme could lay the ground for victory.

Netanyahu moved quickly to guarantee supplies of the vaccine, speaking directly with Pfizer’s Greek-born chief executive, Albert Bourla, whose parents were among the few Jews in Thessalonika to escape the Holocaust.

Netanyahu said Bourla was “very proud of his Greek heritage and his Jewish heritage” and appreciated “the nurturing of relations” between the countries during his years in power.

Equally, Israel was prepared to pay a very high price for early delivery, according to reports in the Israeli media, with minister for finance Yisrael Katz refusing to say exactly how much despite repeated questioning.

However, given the successful campaign to date, few Israelis care about the cost. The country has also drawn on its own advantages: it is small, has a well-equipped public health system and ample experience in coping with national emergencies.

“It’s really being treated like a war and Israel is experienced in battles,” said infectious disease expert Prof Allon Moses. “It’s very similar to battle – you have an enemy, you have the right ammunition and you just have to deliver.”

People who have met Netanyahu in closed meetings in recent weeks were quoted as saying that he believes that mass inoculation will dramatically change the mood of the country.

“People in the end vote according to action taken, on results, on achievement,” Netanyahu said. “In the moment of truth, they know who brought them the vaccines, and who is getting them out of the crisis.”

Given the need for a second dose of the Pfizer vaccine three weeks after the first, and a lag thereafter before it takes full effect, the first signs that the campaign is working will not come until the middle of February.

Netanyahu personally handled the vaccination issue from the start, blocking an attempt by ministers to discuss the issue at cabinet, claiming he did not want to politicise the matter. He also made sure he was the first to receive the jab, launching the vaccination drive on December 19th at Tel Aviv’s Sheba hospital, an event broadcast live on television, radio and online.

With its extraordinary success in getting stocks of the vaccine, and the successful rollout of what it has received, Israel currently leads the race, along with Bahrain, to ensure that its population is protected from the disease.

Along with front-line medical staff, the jab is being limited initially to the over-60s, who have made up more than 90 per cent of Israel’s 3,300-plus deaths linked to Covid-19, and others deemed to be at highest risk.

By the end of March, five million people may have received the vaccine, allowing families and friends to gather safely for the Passover holiday and to vote in a fourth general election in two years.

Some 150,000 a day are getting injections at the moment. However, the rapid rollout has not prevented a surge in infections, which has led to Israel’s third national lockdown, including a ban on foreigners entering the country.

The Israeli story with Covid-19, like elsewhere, has been marred by failures and disagreements. Health advice was ignored, the government’s communications were mocked and there were lax rules on international travel.

Despite suggestions otherwise, Israel has so far used only the Pfizer two-dose vaccine, but further supplies from the manufacturer are not expected until February. It has ordered millions of doses of the Moderna and AstraZeneca vaccines, too.

Moderna had promised its first deliveries to Israel before March, though weekend local reports suggested supplies could come next week. But the AstraZeneca vaccine, although approved by the regulator in the UK, will not be used in Israel until it is approved by the United States Food and Drug Administration.

Due to the success of the initial drive, Israel has enough doses left for another week of vaccinations, by which time more than two million people will have been covered, including most of the over-60s .

On January 10th, clinics will stop administering first doses and concentrate on giving a second jab to those already given the first. Inoculations for those awaiting a first dose will resume in early February, once new shipments arrive.

Three million extra Pfizer vaccines are due by February, and the same number is again expected in March and April. On Thursday, prisoners, prison staff, air and seaport workers and those in contact with the dead were added to the top priority list.

Divisions, though, have emerged about who should be covered first. Tel Aviv municipality’s plans to vaccinate teachers next week has provoked criticism from Israel’s coronavirus co-ordinator, Prof Nahman Ash.

“I agree that it is a good idea to vaccinate teachers and school staff,” he said, “But the more vulnerable in the population – the elderly and those with underlying conditions – must come first.”

Some 300 vaccination centres – which have so far seen few, if any, issues – are in operation. Soldiers began to be vaccinated last week, beginning with the medical corps and other high-risk troops.

The successful rollout of the campaign has changed the public mood. A month ago, large numbers of Israelis were hesitant about the vaccine. Now the main question voiced is how quickly they can get the jab.

Every Israeli has received WhatsApp images from smiling relatives or friends receiving the jab, which has led to a sense of national pride that Israel is leading the world. “Are we still ahead of Bahrain?” is a question now frequently asked.

Once people have the second Pfizer jab they will receive a “green passport” via a phone app to prove they have been vaccinated – so they will not have to isolate if they are exposed to a person with the virus, or if they return from abroad.

Demand is now so high that appointment booking websites have crashed, while phone bookings can take an hour or more. Inoculation centres operate 24-7, including Saturdays, despite strong opposition from conservatives.

The weakest link in the chain remains the rollout among the Israeli Arab community, who make up almost 20 per cent of Israel’s population. Inoculation levels in the Arab sector are significantly lower than elsewhere.

Health experts point to mistrust of the authorities among Arabs, combined with unfounded rumours over negative side effects. The government has launched a huge advertising campaign to try to boost these numbers.