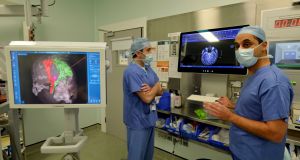 Last January in a classroom somewhere in Ireland, a 16-year-old girl noticed something was wrong with her handwriting.

Things quickly deteriorated. The creeping weakness in her right hand gradually spread to her right leg and then to her left eyelid, which began to droop. Double vision soon followed as her eyes no longer moved in perfect sync. The girl was slowly becoming paralysed.

The cause was a 2cm pilocytic astrocytoma, a benign tumour that is generally harmless. However in this case it was rooted in the “most unforgiving” area of the teenager’s brainstem; surgery would traditionally be far too risky to contemplate.

But six months later, doctors at Beaumont Hospital’s national neurosurgery department, aided by “game changing” technology, would successfully undertake what they believe is the first deep brainstem surgery of its kind in the world.

“A benign tumour under your skin or in your lung or anywhere else in the body doesn’t do too much to you. But a benign tumour in this area will either make you very disabled or kill you,” said Mr Mohsen Javadpour, a neurosurgeon specialising in blood vessels in the brain, and one half of the Beaumont team.

The patient is recovering well and the two surgeons – Mr Javadpour and Mr Kieron Sweeney, who specialises in paediatric neurosurgery – are preparing to publish details of their work. As far as they can tell from the available literature, it is a medical first that will put them to the fore of neurosurgery, but it was not an easy decision.

During an interview in an operating theatre in the Dublin hospital, they explained the surgery and the risks. Equipment, secured thanks to a €200,000 donation from the family of a former patient, made it all possible.

In order to access the tumour, buried deep in the midbrain area, they used the Nico BrainPath, a navigable tubular retractor about 11mm in diameter that is inserted into the skull. It enables a neurosurgeon to navigate between the folds and neural structures in the brain to reach the target area using image guidance computer technology. Once inside, the centre part is removed allowing access of about 10mm through which to operate. A Nico Myriad section is then inserted that simultaneously slices and sucks out tissue.

Before the procedure the two surgeons held a video conference with colleagues around the world, all of who suggested a different approach.

“[The patient and her parents] were already aware of the surgical complexities. So when I said the Italians recommend going [in] from the front, the Germans from the side, the British from a different point from the front, [and] the Americans said to come at it similar to this, it just confirmed what had already been mentioned to them [the family] about the complexity behind it,” Mr Sweeney said.

“The only thing that the family said was that they trust us and that they didn’t want to feel like they were being experimented on; they were partners with us in the decision-making.”

The complexities are starkly illustrated on the monitors: the relatively small tumour area surrounded by thick, cloudlike plumes of green and red. These are the corticospinal tracts, primary pathways that control the arms and legs. A thin red line on the screen, like a laser arrow, shows the pathway the surgeons used to reach the tumour.

“These nerve fibres all have to be avoided, otherwise the patient will be paralysed on the opposite side of the body,” explained Mr Javadpour. He goes on to show how the girl’s tumour was also close to the basilar artery suppling blood to the brain stem. If that gets damaged during surgery, the patient could either die or be left with locked-in syndrome where they lose all movement except the ability to blink.

During the five-hour procedure the surgeons constantly monitored electric signals in the nerves to ensure there is no damage but it is an extremely delicate undertaking.

“Everything that controls your heart rate, your breathing, your facial movements, everything you can possibly think of has to go through the brainstem. And that is where we are operating,” Mr Javadpour explained.

The morning after the operation an MRI showed some success but that not enough of the tumour was removed. The surgery had to be repeated the following day and in the end, as much as 90 per cent of the tumour was gone.

“The most difficult part of the second operation was the emotional drain on the family and the surgeons,” said Mr Javadpour.

He added: “I felt my legs going like jelly walking up the steps to ICU to tell the family: will you let us go back in tomorrow? That was probably the hardest part of the 48 hours; do you mind if we do all of that again?”