Is this the only picture of James Connolly from the Easter Rising? 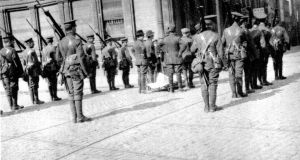 The photograph was taken by a Second Lieutenant Milligan of the Royal Irish Rifles at the very north end of O’Connell Street, probably with his back to the Parnell monument. All the men are facing into Parnell Street, and on their left is Cavendish Row. On the large building, “National Bank Ltd”, which was No. 165 Parnell Street, can be made out.

Of all the executions carried out during the 1916 Easter Rising, none raised as much public anger then or since as the execution of James Connolly.

Connolly, who was one of the last to be executed, was shot in a chair in the courtyard of Kilmainham Jail. He was so wounded that he could not stand up to face the firing squad.

Now, almost 100 years after the Rising, the first photograph purporting to be that of Connolly during that fateful week in Dublin has emerged.

It is a picture of a man on a stretcher taken on Saturday evening April 29th, 1916, after the Provisional Government had surrendered. The man is covered in a white sheet.

The picture is taken at the corner of O’Connell Street and Parnell Street. The man on the stretcher is flanked by six of his followers who have been arrested and they are surrounded by British soldiers.

The photograph surfaced in an eBay auction 10 years ago when the officer’s box of a Second Lieutenant Milligan of the Royal Irish Rifles was put up for sale as a single lot.

Easter Rising historian Mick O’Farrell bid for the lot, which included other never before released photographs of the Rising, but was outbid by a British collector Karl Vines.

Mr O’Farrell is convinced the photograph is that of Connolly because it correspondents with various witness accounts of what happened after the rebels surrendered.

The photograph has written on the back: “Sinn Féin officers taken prisoners Saturday 29/4/16”.

Mr O’Farrell said his interest was piqued because of the presence of so many British soldiers surrounding the man on the stretcher. “I knew it was somebody significant. I’m definite it was Connolly,” he said.

Several accounts in the Bureau of Military History recall how Connolly was carried from the Moore Street headquarters where rebel leaders were based on a stretcher to the National Bank at the corner of O’Connell Street and Parnell Street where the British Army battalion headquarters was based.

One from an officer Liam Tannam states: “We were then brought to the centre of the road and ordered to march in the direction of the Parnell Monument. We were surrounded by 30/50 soldiers with fixed bayonets. Of course, Connolly was being carried by the four men.”

The Citizen Army officers were ordered to take Connolly to Dublin Castle which is the opposite way, but they were asked first to take him to the headquarters of the regiment.

“As far as his officers are concerned, they were taking Connolly to treat for (surrender) terms, but these were rejected and then they were held prisoner,” said Mr O’Farrell

The photograph is included in Mr O’Farrell’s new book The 1916 Diaries which contains accounts of an Irish rebel and a British soldier.

It includes an account from Company Sergeant Major S.H Lomas of the Sherwood Foresters who recalled that Padraig Pearse whistled as he faced the firing squad.

Lomas wrote: “It was sad to think that these three brave men who met their death so bravely should be fighting for a cause which proved so useless and has been the means of so much bloodshed.”