IronMan Dublin: No gain without pain, but where’s the pain? 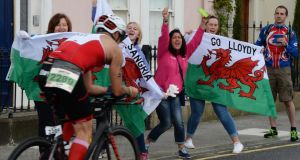 Supporters with Welsh flags cheer on a rider in Dún Laoghaire during the IronMan triathlon in Dublin on Sunday. Photograph: Cyril Byrne/The Irish Times 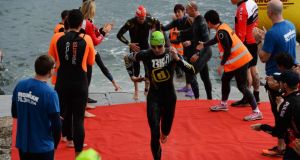 Competitors emerge from the water in Dún Laoghaire during the IronMan 70.3 Dublin triathlon on Sunday. Photograph: Cyril Byrne/The Irish Times 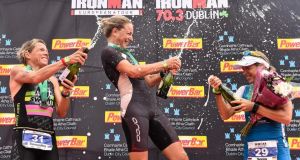 All about the joy: Susie Cheetham (centre) of Great Britain, celebrates her Dublin IronMan 70.3 win with, in second place, Samantha Warriner (left) of New Zealand, and, in third, Sonja Tajisich, of Germany. Photograph: David Maher/Sportsfile

What was most distressing about the first officially sanctioned IronMan event in Dublin was the absence of anything resembling distress on the faces of those who crossed the finishing line not long before midday on Sunday.

Despite having just completed a 1.9km open sea swim, immediately followed by a 90km cycle around north Co Dublin and a 21km running race around the Phoenix Park in less than five hours, most of the top athletes were full of smiles when they were done.

They were full of smiles and happy to pose for selfies with family and dance little jigs with friends who had gathered to cheer them on in what must rank as one of the most gruelling races to ever take place in the capital.

They put the rest of us to shame.

Even getting to the starting line would have proved challenging for most people because of the early start. Shortly after 6am, the 2,500 athletes who had registered for the event started arriving in the large white marquee at the edge of Scotsman’s Bay in Dún Laoghaire.

Among them was Chris Burke. “It’s great to be able to take part in an event like this in my home country, she said.

“I’ve been training for about a year. I do maybe three swims week, a couple of runs and a long bike ride. I’m hoping to do it in around six and a half hours but I’d love to break six hours.”

As race time loomed, model and author of a recently published cookbook Roz Purcell was attracting much attention. She was not racing and was at the starting line to support her boyfriend Bressie, who was racing.

She had planned to compete and would have been well able for it, having already finished one Ironman in Austria in a creditable time of six hours last year.

“I had a hairline fracture in my hip earlier this year and then was focused on my cookbook so I didn’t have time,” she told The Irish Times. Then Bressie raced passed looking stressed as he made his way to the starting line.

“I’m late,” was all he could say. He wasn’t alone in his lateness. All along the promenade men and women hurried to the water’s edge with anxious looks on their faces as they stared into the cold snot green water of the bay.

Fintan McCormack was more relaxed. He’d travelled from Lanesboro along with nine members of his triathlon club to take part in what would be his first IronMan.

“I don’t really care what time I do it in, all I want to do is finish,” he said. “It’s the running I’m dreading most. I wouldn’t run out of my house if it was on fire,” he laughed.

As he spoke, the first of the professionals came out of the water not much more than 20 minutes after entering it. “It’s taken nothing out of them,” McCormack said, a hint of worry entering his voice. “They just seem to push through the pain.”

The three pros who came out of the water first were led by top Irish IronMan Kevin Thornton. All three had swum the distance very close together and there was virtually nothing separating them as the raced barefoot up the promenade to the transition station, wrestling all the while with their wetsuits.

Then, suddenly, the wetsuits were gone and they were on their bikes heading towards North Co Dublin.

Down by the water’s edge, the fastest of the amateurs were swimming to shore having completed the 1.9km swim in less than 40 minutes.

Camaraderie was the watchword as they helped each other from the water to a chorus of “handy on the steps now lads”, from the stewards watching over them.

As they hopped on their bespoke bikes with special disc wheels costing thousands of euro and barrelled through the town at speed, John O’Kane was selling coffee from his brother Bryan’s stall.

“I just volunteered to come down and work because I wanted to see the event. I want to soak up the atmosphere,” he said. “The swim was very impressive, to see all those athletes dwarfed in the vastness of the sea.”

Would he consider it himself? “ I’d like to do it sometime for sure. I’ve done long distance running and alpine cycling so those two wouldn’t be a problem. I’d need to tweak the swimming a bit. Maybe a bit more than a bit.”

There were hundreds of cyclists flying past at that point. “Come on Sebastian let’s hit the road baby,” one shouted at his mate. They both laughed, clearly not trying hard enough.

Denis Chevrot was one athlete who certainly was trying hard enough. He was seconds behind Thornton coming out of the water and seven minutes head of him when he crossed the finish line first in a time of four hours, one minute and 35 seconds.

Markus Thomschke of Germany was in second place, followed by Thornton who finished in a time of four hours, eight minutes and 34 seconds.

British woman Susie Cheetham was the first woman across the line in a time of four hours, 27 minutes and nine seconds, just ahead of Samantha Warriner from New Zealand.

German Sonja Tajsich, who had been described as the “fastest triathlete on land” was only the third fastest this time out.

Thornton’s time would have been considerably faster - and he would have been much closer to first place - had he not had suffered a puncture just outside Dunboyne when he was race leader. “It was the fastest tyre change of my life, I think,” he said at the finish line.

“I had the puncture repaired in three minutes.”

Never mind the time for the tyre change, what about the time it took to finish the race?

“I was delighted to be on the podium,” he said. “When I started out, I was looking for a top five position. I have to say coming up the north quays in my home country being cheered on by locals was a little bit surreal for me,” the professional triathlete said.

“It’s wonderful to have an international event of this calibre in the city.”

His sentiments were echoed by Dublin’s Lord Mayor Críona Ní Dhálaigh, who was on hand to present the medals and flowers to the winners as the event was being officially hosted by Dublin City Council.

“It has been a fantastic success,” she said, “And hopefully it will happen again next year.” It is very likely, as the city is scheduled to host a full-distance Ironman in 2016.

Would she consider taking part? “I’m practising for a 5k myself. I don’t know how these athletes do it. They are just brilliant.”