Rising wages and falling prices may lead to average monthly spend of more than €2,500 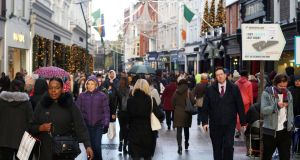 Ibec predicts an increase in total sales of more than €100m, with sales during the Christmas season expected to top €4.5bn, up from €4.4bn in 2016. Photograph: Stephen Collins/Collins Photos

It could be a very happy Christmas for Irish retailers with shoppers taking advantage of rising wages and falling prices to spend significantly more in the weeks ahead, a new report suggests.

Irish consumer spending will reach its annual peak in December with households set to spend an average of €2,654 in shops this month, according to a Christmas Monitor published by Retail Ireland.

The Ibec group, which represents the retail trade, has estimated households will spend about €870 more than in any other month of the year and 2.6 per cent more than they did last Christmas.

It predicts an increase in total sales of more than €100 million, with sales during the Christmas season expected to top €4.5 billion, up from €4.4 billion in 2016.

It also suggests the prices of goods has fallen by 2.2 per cent in the first 10 months of 2017 and by 8.4 per cent in the last three years. The pattern of lower prices is set to continue as consumers avail of discounts arising from Black Friday and Cyber Monday sales.

While prices are falling, gross disposable income is increasing and has climbed by 5.4 per cent in the first half of 2017, following growth of more than 4 per cent in 2016.

However, with a greater number of Irish shoppers now choosing to shop on foreign websites, the challenge for Irish retailers is to ensure this buoyancy is felt locally and Irish based retailers benefit, Retail Ireland said.

“Now that the uncertain political environment of recent days has passed, retailers are looking forward to the approaching Christmas period with renewed optimism,” said the group’s director Thomas Burke.

He pointed to the “growing migration by Irish consumers” to the internet and he said traders have to date been unable to stem the flow of close to 75 per cent of online consumer spending that leaves these shores.

Central Bank statistics show that total e-commerce spend is likely to exceed €16 billion before year end, a 50 per cent increase since 2015.

Mr Burke said department stores were expecting Christmas to be “a bit of a nail-biter this year” with last-minute shopping expected well into the final week.

For 2017 the big focus is around personalisation, fragrance, champagne and chocolates. For men it will be about trainers, expensive branded and limited editions at mid-price, and as always, for women, luxury accessories and niche fragrance.

TVs , tablets and video game systems were the key sales drivers over Black Friday and Cyber Monday and significant demand for these products is expected continue up to Christmas Day. While discounting and promotions were used to generate sales over the Black Friday weekend, there will be a renewed emphasis on margin retention on the run up to Christmas.