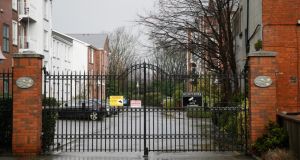 The owners of apartments in a Dublin 8 complex face being asked to pay €3 million – or up to about €26,000 each – to remedy fire-safety issues that could lead to the shuttering of the development should fire inspectors be alerted.

A barrister said the owners of the 119 apartments at St James’s Wood have little or no legal recourse under Irish building law, as the development, in Kilmainham, was built almost 20 years ago.

A series of fire-safety reports seen by The Irish Times show multiple and widespread problems, including deficient lighting and alarm systems and walls that would not contain a fire in one of the apartments for the required length of time.

When shown the reports, industry sources said the faults are “red line issues” that could lead to the immediate closure of the building were an official complaint made.

But Dublin Fire Brigade said the fire-safety officer had received “no complaints in relation to non-compliance with the granted fire safety cert” at the complex.

Do you live in St James’s Wood? Share your story here

St James’s Wood was constructed in 2000 by Cosgrave Property Group, the respected developer of several big projects in Ireland and Britain. The group said it would not comment on the matter.

“You’re out of time”

Some residents of the complex say they cannot afford the remedial works and are concerned about their apartments becoming devalued if the issues become known.

The Residential Property Price Register shows that one apartment at St James’s Wood sold for €265,000 last year; another sold for €274,000 in 2016. A search of property websites lists some of the apartments as being at the sale-agreed stage.

In July 2017 the board of management advised that “the best way forward is to park the decision on pursuing the developer legally and carry out remedial works... keeping the fire-safety works in St James Wood out of the public domain”, according to minutes from a residents’ meeting.

At a meeting in June a show of hands made it clear that “the blended approach of commencing remedial works whilst pursuing legal options was preferable among the members present”.

But the statue of limitations in such matters means the residents face little chance of legal success, according to Lydia Bunni, a barrister who specialises in construction law. She said residents have six years from the time a fault becomes “manifest” to take legal action. “Arguably the damage became manifest at the time those apartments were built, in 2000,” Ms Bunni said. “It’s very unfair, but that’s the current position.”

She said residents could take a test case, but it would be a “huge risk” and could go as far as the Supreme Court. “They would have to take the case on the basis that the law needs to change,” she said. “If I was advising them I would advise: ‘No, it’s too old. You’re out of time.’ ”