Irish nanny plans to sue over wrongful detention in US 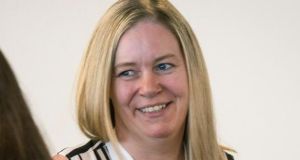 Irish nanny Aisling Brady McCarthy, against whom a murder charge was dropped in the United States over the death of a baby in her care, plans to sue over her wrongful conviction. Photograph: Keith Bedford/ Boston Globe via AP

Irish nanny Aisling Brady McCarthy, against whom a murder charge was dropped in the United States over the death of a baby in her care, plans to sue over her wrongful detention.

Ms McCarthy was charged initially with assault and later murder in the first degree, meaning her actions were wilful and premeditated, over the death of one-year-old Rehma Sabir in January 2013.

The Irish woman was looking after the infant when police were called to the child’s family home in Cambridge near Boston on January 14th, 2013, to find the baby unconscious but breathing in her cot. She died a few days later in hospital.

She spent 27 months in a prison and a further three months under house arrest before Middlesex County district attorney dropped the charges.

In an interview with The Boston Globe on Saturday, Ms McCarthy said she wants Dr. Alice Newton, the doctor who first implicated her in the death of Rehma Sabir, and Middlesex District Attorney Marian Ryan and prosecutors who a judge found withheld exculpatory evidence, held accountable. Newton and Ryan have defended their actions.

“They weren’t just wrong in my case, they were reckless,” Ms McCarthy told the newspaper. “And they never lost a minute’s sleep. They just moved on to the next case. I want to expose this because I don’t want it to happen to anyone else.”

She is planning to use the civil courts to expose what happened to her in a criminal court.

The newspaper says hers is just one of several cases of shaken-baby syndrome in Middlesex County and elsewhere that have collapsed in a heap of shaky evidence and conflicting medical diagnoses.

Ms McCarthy said she is torn by her desire to move on and a need to use her case to show how unchecked power can needlessly ruin lives.

Ms McCarthy said she got cards and letters from all over the world while she was in prison, and from the families of children she had taken care of over the years.

“That’s what kept me going,” she said. “That and the support of my family.”

One family brought the little girls she had minded into the prison to visit her, she added. Some of her former employers were prepared to testify about her character on her behalf. Neither police nor prosecutors talked to any of these people before or after she was charged.

Had they done so, she said, they would have realised that what they were accusing her of doing was so out of character, that a nanny with so much experience would not lose her head over a sickly, colicky baby.

Ms McCarthy said she grieves for Rehma, the little girl whose cause of death remains a mystery.

“I looked after Rehma 10 hours a day, five days a week,” she said. “I stayed over to help her sleep train. I’ve been looking after kids since I was 13. I had seven younger brothers and sisters. I started with a family in Lexington with seven kids. I always got work by word of mouth.”

Now living in Cork with her husband, Ms McCarthy said she has not been able to find work since her return home.

“I have changed. I don’t trust people like I used to. You’re nearly afraid to get to know people because they’ll say, ‘Oh, you’re the girl from Boston.’ It makes me want to cut my hair off and dye it black.”

Ms McCarthy said what happened to her has given her a new perspective.

“When I was in prison, I had a loving family that came to see me. I called my husband twice a day. Some of the girls had nobody. Some people have nothing. No matter what, your life is always better than someone else’s.”